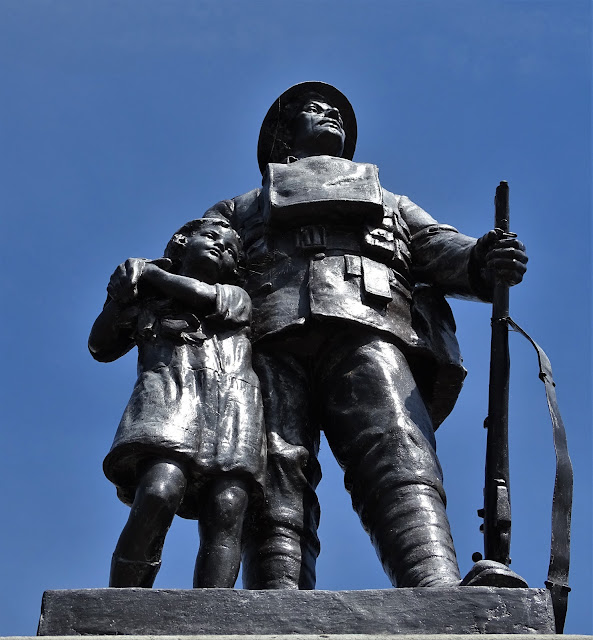 I boarded the 10.37 train to Alfreton in Derbyshire. The journey only took half an hour and my cheap day return ticket only cost £8.40. It was nice to give Clint a rest.

It was a warm day but I was prepared - with a litre of cold water in my rucksack, a tube of sun lotion, my sun hat and an apple. What more do you need for an eight mile ramble in July sunshine? Oh - a map and my trusty camera too - along with "The Gentry", a book by historian Adam Nicolson.

And so I arrived at Alfreton Station. I was the only passenger who alighted from the Nottingham train. I plodded through the former coal mining town from east to west passing humble brick terraces and takeaway shops. There was a micropub called "What's Your Poison?" and in the old marketplace a rather impressive war memorial that I have driven past many times, never before stopping to take a photograph of it.

Ahead on the edge of town by Alfreton Hall, I was impressed by my first view of the parish church - St Martin's. It was nice to find the door to this old church unlocked for several ladies of the town were inside busily preparing for the annual flower show this coming weekend. 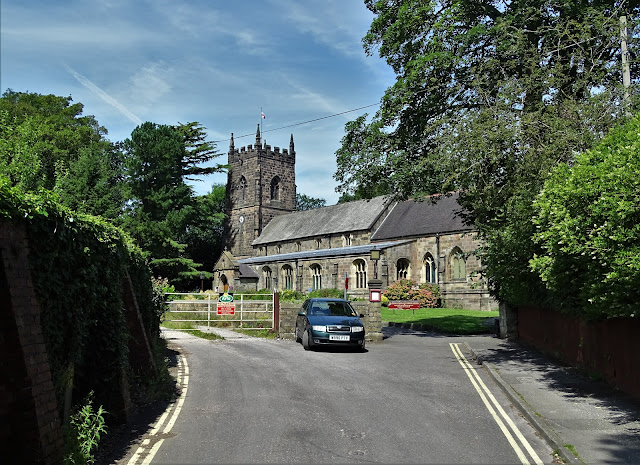 One of the ladies, a former church warden called Sylvia, introduced herself and kindly led me around some of the church's most noteworthy features. I was slightly perturbed when she took me into a side vestry where the priest dons his robes each Sunday. There was a velvet chaise longue in there but fortunately I escaped from the little room with my honour intact. Sylvia was round about eighty years old.
Soon I was tramping through the countryside to Four Lane Ends and Oakerthorpe. There was a "Roman Fortlet" marked on the map near Coneygrey Farm but there was little to see - just a grassy mound.
On I walked to Swanwick where I stopped to consume a cheese and pickle sandwich and a pint of semi-skimmed milk that I purchased in an Asian convenience store. Then on to Sleetmoor Lane, through an industrial estate and across a main road to another industrial estate where I paused to take a picture of a factory that makes fabrics for the car industry.

When I reached the last factory gate, a very fat man in a "Securitas" jersey accosted me. Apparently, someone had seen me from a window taking the factory photo as I passed by. I assured him that I was not a spy from a rival fabric factory and that I was not an Islamic State terrorist either. The fat man was pleasant so I didn't have the heart to inform him that people can take pictures where ever they go on public footpaths in this "free" country. 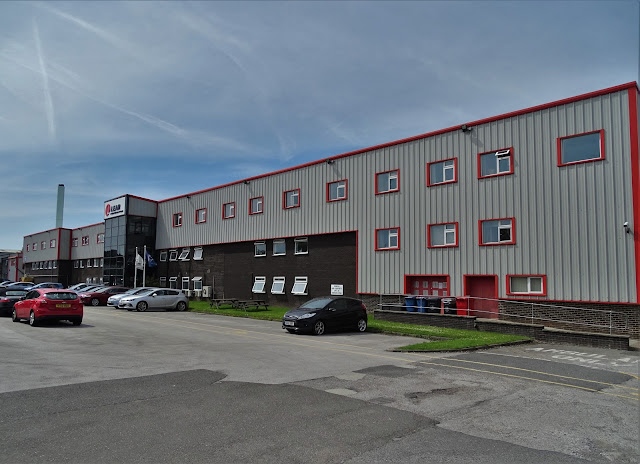 More plodding. Through new housing developments. Across the busy A38 road and back to the Edwardian terraces of Alfreton. On Prospect Street, I passed another micropub, creatively titled "Prospect Street Micropub". And very soon I was back at the town's little station waiting for the 15.44 train back to Sheffield.
- July 05, 2019