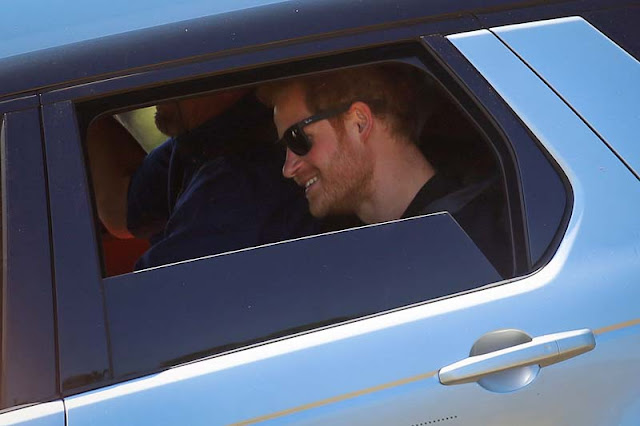 I forgot to mention that we saw Prince Harry on Thursday morning. We were on our way out of the city, bound for  Darlington. On Netherthorpe Road we spotted police motorcycle outriders in the opposite lanes of the dual carriageway. Their blue lights were flashing and they were followed by three black cars.

In the middle car - a Range Rover - there was Prince Harry in an open-necked white shirt with a grey blazer. He was chatting with somebody else in the back of the vehicle and he was on his way to Sheffield Children's Hospital to officially open a new wing.

The strange thing is that Prince Harry did not see me. I thought he would have been looking across at our side of the road just in case I happened to be sitting there in my luxury South Korean automobile (aka Clint). Okay we did not have motorcycle outriders with flashing lights but surely Prince Harry should have been looking our way - just in case he saw me. He might not get a better opportunity in the rest of his life.

I saw Queen Elizabeth II when she visited Hull in the late nineteen fifties. I waved a little union jack flag with hundreds of other children but The Queen had a special wave just for me and for a tiny segment of a second our eyes connected.

In the late sixties I met The Queen Mother - Elizabeth Bowes-Lyon. I was representing East Yorkshire youth clubs at an anniversary reception for The National Association of Youth Clubs. I shook her white gloved hand and we conversed for what seemed like five minutes. She was most charming and made me feel at ease. I was only fifteen.

But no - Prince Harry did not see me. When he reads this blogpost he will surely be mortified.
- July 27, 2019