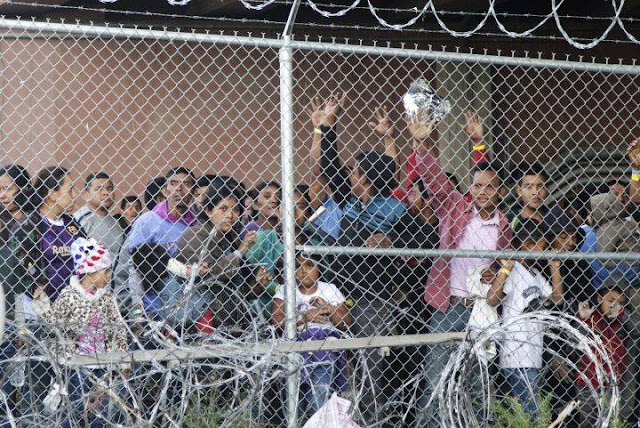 Here, on American Independence Day, I was going to rant about the inhumane treatment of economic migrants and asylum seekers at America's southern border. I was going to continue ranting about the secret Facebook page that Border Control agents have been contributing to in their thousands - demonstrating horrible, insulting disregard for the desperate foreign people they are incarcerating in conditions that are not fit for dogs.

I was going to highlight the way in which small children have been cruelly separated from their parents and the paucity of childcare. And of course I was going to reflect on the way in which the 45th president's nasty attitudes towards migrants and asylum seekers have filtered down to Border Control minions, legitimising racism, sexism and sheer cruelty.

However, I am aware that some American visitors to this blog are Donald J. Trump supporters and out of courtesy I have decided not to rile them on this July 4th by expounding upon the issues noted above. Besides, I am English so arguably I have no right to comment on events happening in the USA. After all, how would I like it if American visitors called by this blog deriding our beloved queen? Yes. These are reasons why I have decided to keep schtum about what is happening at America's southern border.

Instead, let's just read a slice of what the eloquent New York Rep Yvette Clarke had to say earlier this week: "I’ve heard a lot of language about who these people are on our southern border. Let’s make it clear: They are seeking refuge in the United States of America. We send funding around the world to refugee camps, in nations that are war-torn. And here we have, on our own border, the most horrific detention of humankind in this generation, in the United States of America. We cannot abide with this. We will not abide with this."

In the summers of 1976 and 1977, Skip at "Skip and Ray's" Bar  on Kinsman Road, Novelty, Ohio always referred to me as "The Limey Bastard" and I have no wish to resurrect that nickname so yes, I am going to keep quiet about the migrant detention crisis - leaving it up to others to petition for infinitely more humane treatment of  desperate strangers in "The Land of the Free".
- July 04, 2019