They were coming back inside the lodge. In panic, I keeled over on the leather sofa aiming to resume my previous position, playing possum.

There were two others now. Smithy - who appeared to be the boss and somebody else who didn't say much. Four of them.

"Get some water!" commanded Smithy.

And before I knew it, a saucepan of cold tap water had been thrown over my head. Of course I reacted it to it and Smithy pulled me up, slapping my face. It was impossible to pretend that I was still unconscious.

"Wake up!" he growled, slapping me again as he yanked the blindfold away. "What are you doing here?"

Beyond him, left of the fireplace something glittery caught my eye. Benny and Ralph were inspecting the contents of two large canvas sacks.

I told Smithy the truth. That I had become disoriented after the rainstorm, that I had stumbled along the old wall, that I had always been curious about Stanedge Lodge.

Smithy and his gang even looked like robbers. With their darting weaselly eyes, they were the kind of men who spend their whole lives looking for opportunities and easy money. I deduced that they had probably raided a jeweller's and they were hiding out at the lodge, till the heat died down.

It was like taking part in  a TV crime drama - the only difference being that this was real life in which happy endings are rarer than hen's teeth and where good certainly doesn't always triumph over evil.

"You know what curiosity did dontcha?" growled Smithy squeezing my chin. "It killed the cat!"

The others laughed raucously as Smithy's gaze wheeled round to them. He was middle-aged , pasty-faced and smelt of stale cigarette smoke.

It seemed that my hands and feet had been bound with industrial plastic ties. They were digging into my flesh now and in spite of Smithy's close presence I squirmed, creasing my face. 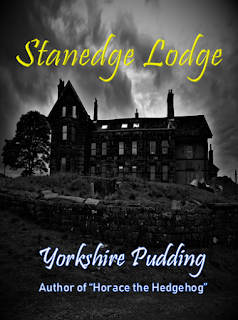 "Hurting you are they?" asked Smithy, showing surprising compassion.

"Get me some scissors Steve!" he told the quiet one and the tall mixed race fellow disappeared for a minute or two.

It was just after Smithy had severed the plastic ties that we first heard the footsteps creaking above.

Everyone went quiet. Still in the process of examining the jewelry and watches, Benny and Ralph froze .

"There's somebody up there!" whispered Ralph. And then we heard shouting. A man and a woman. Muffled.

"I saw someone", I interjected. "When I was outside. Just before one of you guys clouted me. There was somebody up there."

"What do you mean? This place is empty. We've been here ten days," said Smithy.

The gang were deathly quiet, eyeballs raised in their sockets, bottom jaws hanging loose. The footsteps upstairs creaked again, pacing across the floor and the raised voices continued.

A woman yelled, "Get back! Get back in there!"

A man screamed almost unintelligibly. It was hard to make out what he was saying but I heard the words, "vengeance" and  "tomorrow".

It was as if there was a physical struggle going on.

"Go up Steve! See what the fuck's going on!" said Smithy.

Then Smithy turned to me. "You go! See what's happening!"

The unseen feet continued to thud on the ceiling. The voices remained raised . "Get back! Get off me!" and "Sweet as honey! Sweet as pie!" And there was what I can only describe as manic laughter.

The gang and I stood at the bottom of the lodge's oaken staircase. Smithy shoved my back. The head of a dead bear glowered down at me from the stone wall of the entrance lobby. Benny was holding a hurricane lantern that he'd grabbed from the panelled room. It cast moving shadows upon the carpeted  treads of the staircase.

The voices upstairs were becoming louder and more frenetic - like music rising to a crescendo. The rhythm of feet on the wooden floor had grown more urgent - crazy fast like a rock drummer playing a solo. The entrance hall was filled with sound.

"What the hell's going on?" asked Benny, his eyes wider than before.

"I'm scared!" admitted Ralph. "I told you this place was fucking haunted!"

"Get up there!" ordered Smithy.

I  proceeded up the stairs, one step at a time. I could still see the half-moon through a Victorian stained glass window that depicted shooters on the moor.  Ralph said the place was haunted but I didn't believe in ghosts so what the hell was I about to find up here on the first floor of the lodge? Still the insane yelling. Still the thundering feet. My heartbeat pounded madly inside my skull.
- July 12, 2019