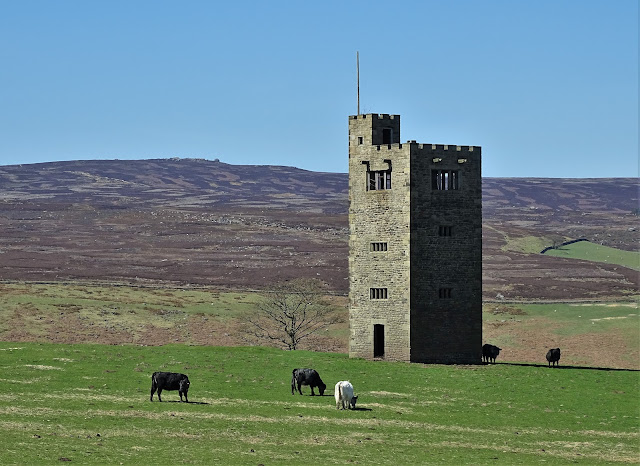 It's nice when you can squeeze two blogposts out of one country ramble. I'm thinking about Tuesday - the day I saw the sheep with the two lambs.

Earlier I had parked Clint at Hollow Meadows before plodding four or five miles along a familiar route that took me to Sugworth Hall and the redundant tower known as Boot's Folly..

I have blogged about that tower before and I have photographed it on several occasions. On Tuesday I was pleased to see some cows in the vicinity of the tower - adding interest to my images.

The tower was built under the instructions of Charles Boot (1874-1945) who was the wealthy boss of a successful construction company. He lived at Sugworth Hall. When the economic depression of the mid nineteen twenties hit the western world, Charles Boot commissioned the building of a stone tower that would keep a team of his builders occupied for a few months. 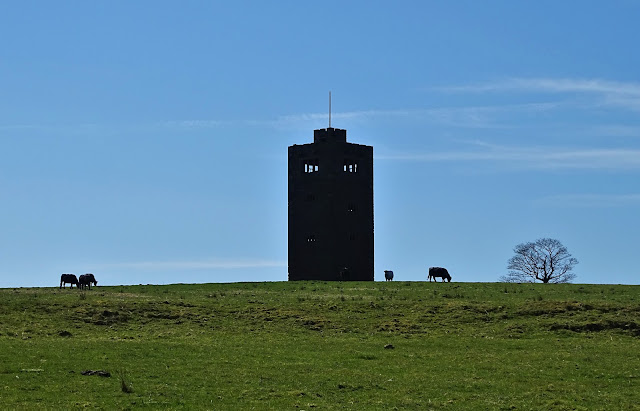 Though disused, it still stands proudly above Strines Reservoir - looking down  the valley to Dale Dike Reservoir and the village of  High Bradfield beyond. In the same decade, the Boot family had a new house built on the estate. It's called Bents House and is just a stone's throw from Boot's Folly. It is assumed that the 1920's team that worked on the grand new house then went on to build the tower.

I love the position of Bents House and have sometimes thought of it as my dream home though of course I have never been inside.

Descending from the tower, I walked parallel to Dale Dike Reservoir and along Bradfield Dale before starting a long climb back up the valley side crossing Blindside Lane, Hoar Stones Road and Wet Shaw Lane. This brought me to  the sheep pasture I referred to in the last blogpost. Soon after that, I watched a brown hare sprinting across a ploughed field. Unlike the rest of us he knew nothing of COVID 19.

Approaching Clint, I could hear him snoring from twenty yards away. I  pressed the button on my electronic car key and he woke up as though emerging from a dream.

"What were you dreaming about?" I asked.

"Need you ask?" he said. "Margaret of course. Lovely Margaret."

"You know. That cute VW Beetle that lives at Number 198.  She winked at me  last night.  Made my radiator boil."

As we drove home, Clint was whistling the theme tune of "The Love Bug" (1968) but I was just happy to have been out on my own plodding miles in the sunshine without a police drone flying above me, feeling free but still within the limits of The City of Sheffield.