I knew things weren't right when I spotted a panda driving a bus. I rubbed my eyes and did a double take. Yes it was a panda - unless the driver had for some unknown reason decided to wear a panda costume for the day. That was it! Fancy dress. Probably raising money for a good cause. I tried to brush the memory from my mind. This was back at the beginning of March.

A couple of days later I noticed that the little golden bamboo grove at the bottom of our garden had been decimated but I could see no sign of a pest infestation or disease. Some of the bamboo canes appeared to have been uprooted. Mysterious.

And then - round about March 18th I was walking in the Derbyshire countryside when I saw a panda strolling towards me on his hind legs. As he passed me by he raised his trilby hat and said "Good morrow!" What the? Had somebody spiked my water bottle?

I thought I was going mad - hallucinating. Then  when I got home Shirley said she had seen a family of pandas entering the old cemetery near her health centre.

We kept spotting them. Pandas stacking shelves in the supermarket. Our weekly refuse collection was undertaken by a team of pandas and there were pandas driving past in Fiat Pandas. There was even a pair of pandas in uniform - sitting in a police panda car drinking coffee from Starbucks unrecyclable beakers. The world appeared to have gone bonkers!

And to cap it all on April 1st, Huw Edwards had been replaced as the BBC newsreader at six o'clock. In his place there was a dirty great panda  - a giant panda in fact. He said his name was Brian Bradshaw (see top picture) and the leading news item was that the government had officially declared a pandemic. Oh            my           God!

Brian said, "And let's go over to Downing Street for the latest from our political correspondent Polly Panda". As Polly was prattling, the famous black door of Number 10 opened and instead of the usual  blonde scarecrow figure with  piggy eyes, another panda emerged with a bunch of fresh bamboo shoots in his mitt. He marched up to the microphone and confirmed that we were indeed in a pandemic and we should expect to see thousands more pandas. while waiting to reach the peak of the pandaemic. 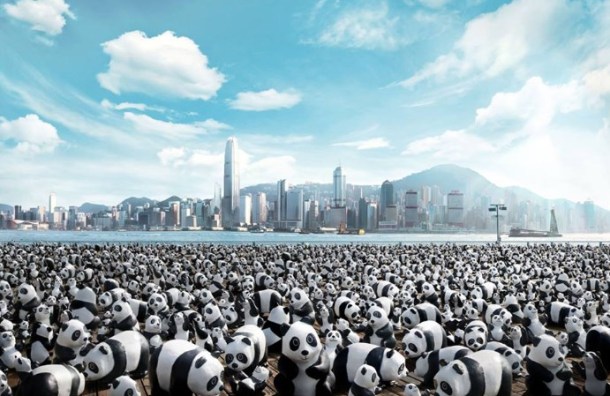