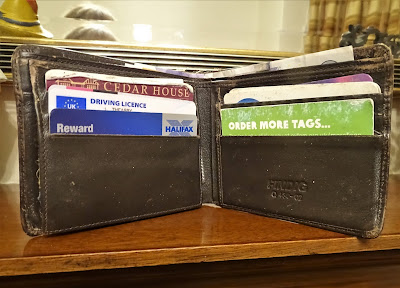 This is my "Findig" leather wallet. I bought it in Bangkok, Thailand in 2011. There's nothing exceptional about it. It serves my purposes nicely. I didn't want a wallet with an integral coin section. In my humble opinion, such wallets are for wusses. Insincere apologies to any male readers who use such a wallet. (Guffaws like Mutley in "The Wacky Races")

In my entire life, I would estimate that I have possessed no more than six wallets. One of them was stolen from me by a prostitute in a bar in Lautoka, Fiji in 1973 when I was as drunk as a bishop on a Butlins holiday. Wallets are like companions that travel with men through huge chunks of their lives. Usually, it's not the same for women.

I could waffle on about wallets for several more paragraphs but that was not the intention behind this particular blogpost.

Inside my wallet there are currently three £20 notes and six £10 notes. That's £120 in total. I collected the three £20 notes  from our local Sainsbury's store on March 19th following two minor wins on The National Lottery. The six £10 notes had been placed in the wallet after a visit to an ATM on March 15th.

The banknotes have remained unused for  over a month. Since the lockdown began all the payments I have made have been contactless card payments. I suspect that you might be the same and so what I want to ask is this - Has the pandemic signalled the end of real money? Will we ever again use banknotes and coins as frequently as we did before? 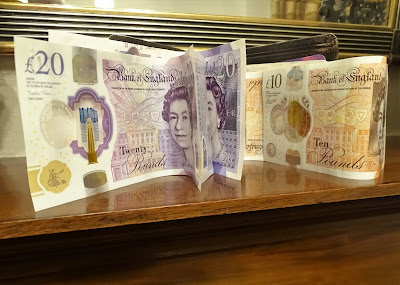