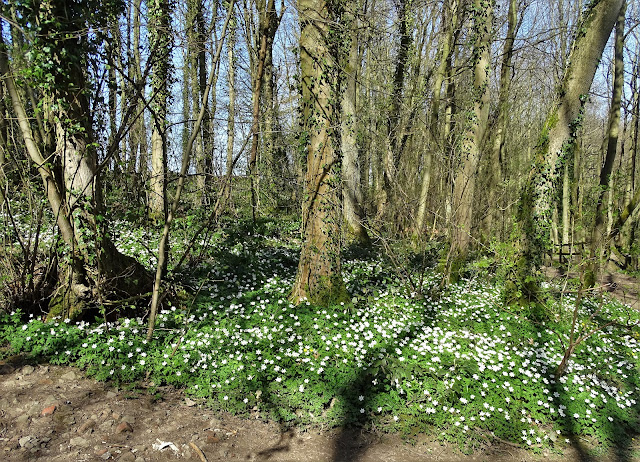 Yesterday afternoon, Clint drove me to the edge of the city and the end of Yorkshire. We were in the suburb of Totley. After parking, I tied my walking boots and set off on a gentle three mile ramble along familiar paths. In the past, if I had undertaken this walk on a weekday, I would not have encountered another soul but yesterday several other people were out and about including a runner who ran right through my invisible two metre ring.

This keeps happening. I try to observe the two metre principle and others encroach. Its worst in supermarkets. Even supermarket employees enter my two metre circle. Don't they know how vital it is to stay apart? I never see cops in or around supermarkets. I guess they are too busy flying drones in The Peak District.

In Gillfield Wood there was a sea of wood anemones. I crossed Totley Brook into Derbyshire and headed up to Woodthorpe Hall. The annoying runner passed me on a tight path that runs by Holmesfield Park Wood. I watched a busy bumble bee casting his shadow on a layered sandstone wall. Can you see him? Where's Mr Bumble? 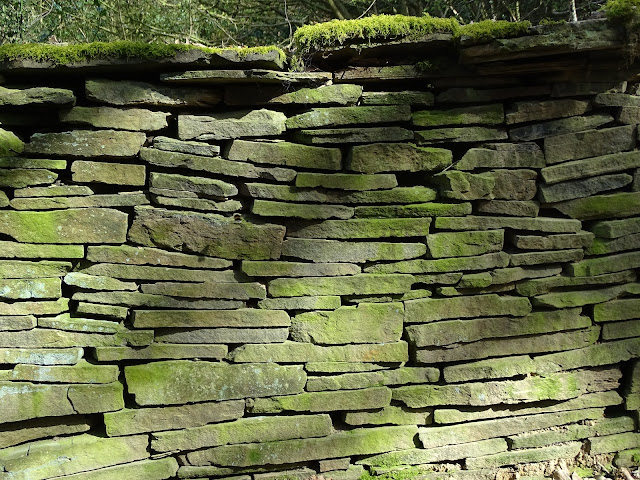 Up to the edge of Holmesfield village then following the "B" road over Holmesfield Common before taking a little used path by Gooseberry Farm. Then back down into the valley of Totley Brook crossing a large crusty field where small shards of crockery reminded me of a certain West London collector of the same.

On Famshawe Gate Road, I paused to take a picture of The Old Hall - an early seventeenth century country house though records show that the estate dates back to at least 1260. Eat your heart out Wyoming! 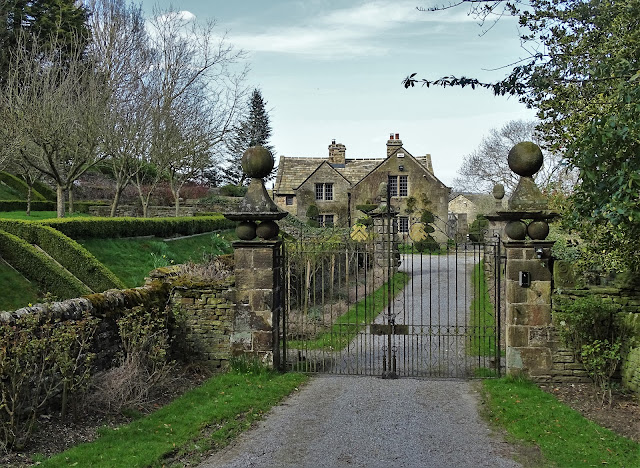 Back down to Gillfield Wood and over the brook into Yorkshire. Three older teenage lads were resting by a hedgerow that was  dressed in pretty hawthorn blossom. Their bicycles rested beside them. I arced around the group as they were blocking the public footpath. Not much social distancing going on there.

Up ahead I could see Clint gleaming in the sunshine. He was humming "Greensleeves" and as I approached he broke into song:
Alas my love you do me wrong
To cast me off discourteously;
And I have loved you oh so long
Delighting in your company.
He was probably thinking about Margaret, the shapely VW Beetle, who lives up our street and consistently repels Clint's romantic advances. Poor Clint.
- April 08, 2020