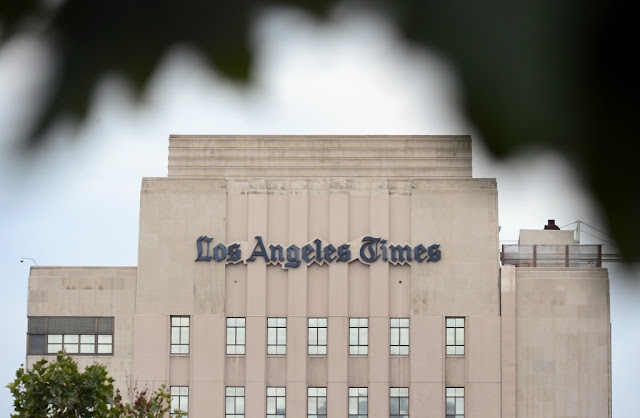 Being an Americophile, I like to keep a handle on what is happening Stateside. Unfortunately, some of the top newspaper sites require subscription. However, the website of "The L.A.Times" still allows open access. During the time of The Virus, I have been over to "The L.A.Times" on  a good number of occasions.


Of course the newspaper has a particular focus upon events in southern California but it is not entirely parochial. It gives serious consideration to both national matters and to significant international happenings too. I especially like the "Opinion" section in which the editor and senior correspondents stand back from the present moment to reflect intelligently upon current affairs.

In general, it is clear that "The L.A.Times" is not a big fan of the forty fifth president. They see through his shenanigans, dissecting his utterances and tweets while identifying both his failings and his oftentimes dubious motives. I guess that in Mr Trump's book, this intelligent scrutiny would put "The L.A.Times" in the "fake news" corral along with other champions of democracy and political transparency.

Commenting on Trump's approach to the COVID 19 crisis, veteran columnist Scott Martelle said this last Thursday: "Amid the noise, he pushes forward his agenda, keeps flogging his supporters like a jockey at Santa Anita Park and tries to keep those who disagree with or oppose him on a defensive footing. That’s no way to lead a country, even one that isn’t in the midst of a dangerous pandemic."

It isn't easy for any newspaper in the western world to both survive and keep the beacons of service and truthfulness burning. But my visits to "The L.A.Times" confirm that the paper maintains its independent spirit and its standards. In free countries, newspapers have always played an important role in describing, in challenging and in unravelling. Their gradual disappearance is very concerning.