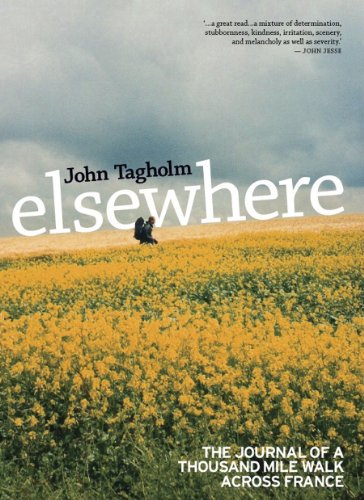 I finished reading this book out on our decking this morning - before the August sun had climbed over the rooftop. It has been a good read.
It is factual and describes day by day the long walk that a forty nine year old Englishman made back in 1997, ahead of his fiftieth birthday. He had set himself the ambitious target of walking from Sangatte near Calais on The English Channel to  St Tropez on France's  Mediterranean coast.  A thousand miles in  total though not of course as the crow flies.
John Tagholm was already an unashamed Francophile, having holidayed and worked in the country on several previous occasions.  He spoke reasonable French. However, he wasn't really a seasoned walker and he had never tackled anything like this before. You might say that he was having something of a mid-life crisis.
The journey took sixty five days and he had very few rest days. He averaged some twenty miles a day in what was an especially hot summer. Sometimes the paths were hard to find and he travelled up hill and down dale, by busy autoroutes and rivers always looking ahead to his next destination.
Of course John Tagholm carried a backpack all the way but because he always stayed in small hotels and ate locally, he did not need to carry any camping equipment. Obviously, this would have reduced the weight of his pack quite considerably.
There is a matter-of-factness about the writing - concerning the weather, the terrain, the villages he passes through, the places where he stayed and the meals he consumed. At times there are references to his self-enforced solitude and his thoughts about his wife and family back in London but it is not what you would call a soulful account.
It doesn't really suggest that the walk has changed him -perhaps becoming a better man than he was when he set off. However, he is often enervated and quite rightly feels an enormous sense of pride in seeing the imagined journey through to completion.
When I walk , I just go out for the day. Twenty miles would be a big distance for me. I have often thought about  tackling a long distance path over several days but the idea of having to carry everything I might need in a heavy backpack is a notion that I find quite off-putting. Consequently, I sit here typing in awe of John Tagholm and people like him who cover great distances, plodding day after day until they reach their destinations.
- August 14, 2022