Okay so let's be clear about this. In any war it takes guts to be a conscientious objector. This was as true of The Vietnam War as any other.

Yesterday as I wrote about Trump's draft dodging I was not implying by any means that when a young man is called up he should go blindly to war, doing what his country asks and not what his conscience says. No that wasn't it at all.

But if the young man in question is part of the establishment and has distant eyes upon the presidency, then he needs to be respectful of the status quo. At the very least he should be open and honest about his reasons for avoiding the draft. Not lying. Not making stuff up. There were no bone spurs and there is no evidence that Trump wished to dodge service in Vietnam because his conscience was troubled. 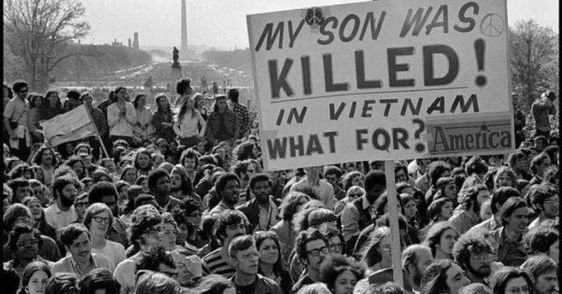 Many who received draft papers fled to Canada. Others signed up for The National Guard or alternative military organisations that would exempt them from service in Vietnam. Plenty of others - just like Trump - feigned mental or physical conditions that would get them off the hook. This seems to have been more common within affluent families where there was financial and legal weight. Far less straightforward and achievable for young men from poorer backgrounds.

By the way, it wasn't just Trump. Three other presidents  managed to evade service in Vietnam and some unanswered questions remain for George W. Bush, Bill Clinton and Joe Biden.

Early in his presidency, Trump's alleged philosophy was clear, "America First! America First!" but he wasn't saying anything like that in 1968.

When I was first intoxicated by popular and progressive music, the period coincided with The Vietnam War and the protest songs it spawned. To accompany this blogpost I have chosen two of the songs that grabbed me back then and still have a certain resonance even though the disastrous war reached its ragged end almost half a century ago: "Moratorium (Bring Our Brothers Home)" by Buffy Sainte-Marie  and "To Susan on the West Coast Waiting" by Donovan.