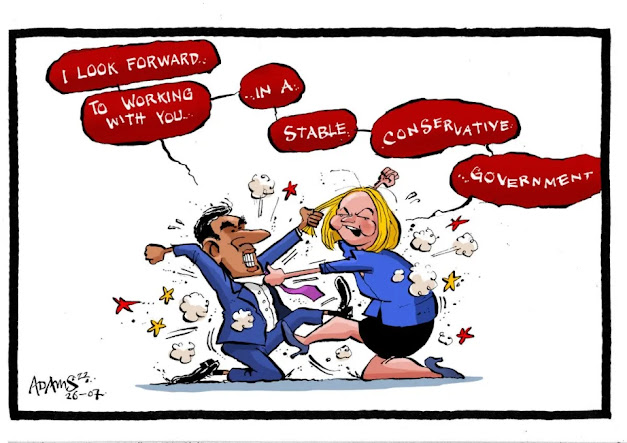 Great Britain will have a new prime minister in September. It will be either Rishi Sunak, aged 42, until very recently The Chancellor of the Exchequer or Mary Elizabeth Truss, aged 47, the current Foreign Secretary. Neither candidate fills me with much hope or expectation. After all, they were both appointed to their ministerial roles by Johnson.

The winner will be selected by paid up members of The Conservative Party - often known as The Tories. There are less than 200,000 of them scattered around the country but mostly in England's rich underbelly - the "Home Counties" that surround London.

Presently, Johnson is seeing out his days in Number Ten and rather bizarrely still acting as our PM until his successor takes over.

Every Wednesday when parliament is in session, Prime Minister's Questions take place around midday. I often watch it live on television and frequently observed Johnson's incredible ability to avoid answering questions. You could ask that guy what he had for breakfast and he would answer by referring to his imagined achievements as this country's political leader.

At his penultimate prime minister's questions he stated that he would be leaving office with his "head held high" and at his last Wednesday PMQ's he said that his "Mission was almost accomplished". Quite flabbergasting.

No contrition whatsoever. No humility. No admitting that he took a number of wrong steps, including allowing a party culture to develop at 10 Downing Street during COVID lockdowns in 2020 and 2021. The arrogance of the fellow is quite breathtaking but then again I very much doubt that Johnson has ever said "sorry" for anything and meant it throughout his life. He is inebriated by the maniacal notion that he is somehow special and can do no wrong.

There is even talk of the pompous oaf returning to office at some later stage when enough political water has passed under the bridge. It's a little like the talk of Trump returning to The White House. You could not make this stuff up. Meanwhile we wait to see which weakling will replace Johnson - Sunak or Truss. It is a grim and uninspirational choice.