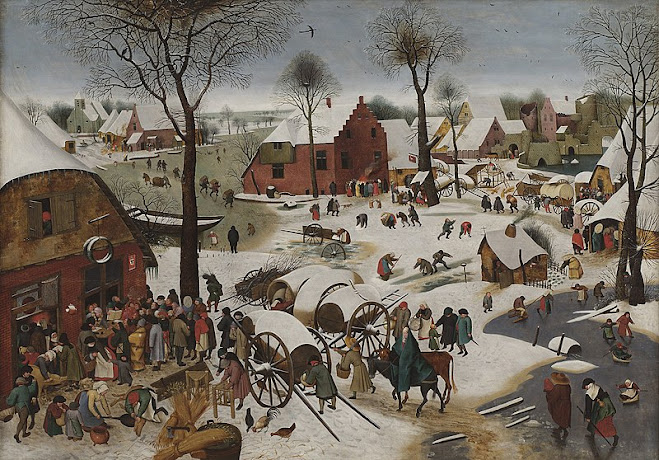 "The Census at Bethlehem" by Pieter Breughel the Younger (c 1600)

Putin's war in Ukraine grinds on though news services rarely mention it these days. No one predicted the terrible consequences. It's not so much the pointless military and civilian  casualties and the random  bombing of Ukrainian towns but the multi-various troublesome knock-on effects upon the rest of the world. Some say it's the reason Trump got back into The White House before his assassination at last month's inauguration.

World energy and fuel supplies have been thrown into disarray and several African countries are experiencing food crises unlike any they have known before.  Bank interest rates continue to soar and the relatively settled world order we knew before  is becoming a distant memory. It's like the title of a well-known African novel - "Things Fall Apart" for that is what is happening - things are in the process of falling apart.

It was very cold in northern England today. The temperature has barely risen above freezing for a week.

Our sleep was fitful under a pile of quilts, blankets and coats. I am fearful that our pipes will freeze for, like most other people, we haven't used our gas boiler throughout the winter. With prices up to ten times higher than in early 2022, it makes us wonder how anybody can still afford to heat their own homes.  It is becoming a  secret luxury only enjoyed by the rich.

We normally spend the day at Heat Centre 23 which is located in the former Waitrose supermarket at the bottom of Ecclesall Road. Each day more and more people arrive and it can get quite packed but at least its warm. You can even shed your outdoor coats, hats and gloves as you soak up the reasonably generous heating like sunshine on a remembered beach. The meals are basic but nutritious, costing little more than three or four pounds per person. Today we had kidney bean stew with dumplings. Some other visitors stared longingly at our bowls.

We left Heat Centre 23 just before it closed for the night and made our way home through the snow. An ambulance roared past at breakneck speed, its blue lights flashing. Another desperate suicide perhaps. We were huddled figures moving along with our fellow citizens like characters in  a sixteenth century painting by one of the Breughels - Older or Younger. It doesn't really matter.

We sold our cars for knockdown prices but we are still connected to the electricity network. Once a week we have a shower using the electric shower unit in the bathroom. We use the kitchen timer to count down the seconds. Two minutes thirty maximum. That's all we can afford until the prices rise again.

We still listen to the BBC news on Radio 4  each morning.  Prime Minister Truss was blethering on again about what her government is doing and how we are all "pulling together" like British bulldogs in the face of this crisis. Another news item spoke of homeless people and beggars marching on parliament in their droves but that won't happen until springtime comes round again. In the meantime, we must simply endure. That's all we can do.