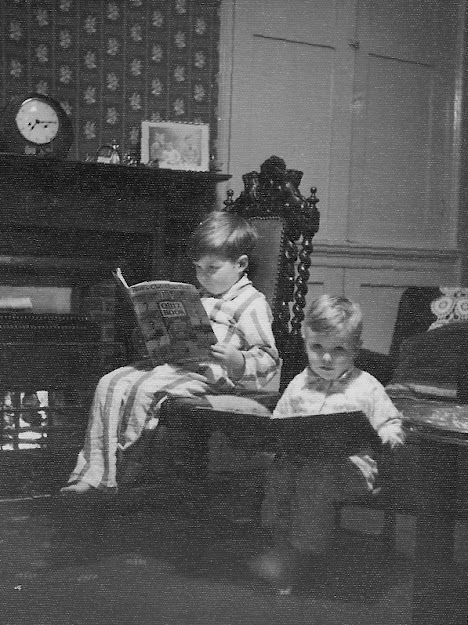 Our parents' coffins were transported to a crematorium but Simon chose to be buried in the churchyard. A plot had been found close to the south wall on which memorial plaques had been affixed - remembering our parents. That was Simon's doing.

My eulogy was well-received. Several people came up to me afterwards and said that I had done well. My aim was to say goodbye to Simon with kind words of remembrance. It was for him and not for me. I was merely the delivery person.

It was emotional to be standing there at the microphone with perhaps sixty attendees in front of me. At times my voice quavered slightly with emotion but I managed to hang on and see it through to the end. I gave him presents every Christmas but this  was my last gift to him.

My son Ian flew into London Heathrow this morning. He had been on "The Today Show" in New York City on Thursday morning - cooking up vegan meals with his "Bosh!" partner Henry. I had arranged the funeral for 3pm to give him a better chance to make it up to Yorkshire and he succeeded.  It was also great to see my brother Paul's Irish widow Josephine there and one of his sons - Michael. We hadn't seen them in ages.

After the funeral, various local people came up to me with faces that I recognised immediately though some names evaded me. It felt as though I was in the bosom of my extended family - my heartland. The place where I came from. Following the funeral, we assembled in "The New Inn" for a buffet, drinks and remembrance

We gave Simon the best send off we could. If he was looking down on the day, I think he would have been pleased. Upon finishing my eulogy, I headed back to my seat in the front pew and said "Sweet dreams Simon!" as I touched the lid of his coffin. The same words I said to him when I kissed his forehead in the hospice the day before he breathed his last breath.