When you're a teacher, you sometimes wonder what the children in front of you will become. A bestselling novelist? A sport-star of international renown? A national politician? Or perhaps something more humble and unsung - a loving parent, a carpenter, a nursery nurse? I guess somebody once taught our Olympic rowers, our parliamentarians, our film directors but me - well I taught these young men:- 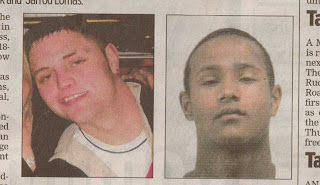 C,D,E & F
The first mixed race lad who I will call A to avoid connection by search engine is currently serving ten years in prison for killing the boy B on his left after a house party on a North Sheffield council estate went wrong. B was pursued by a pack of bloodthirsty yobs who accused him of taking a computer game without consent.
Months later, the gang of four from left to right - C, D, E and F attended a social soiree at the notorious Empire Club - you know the sort of thing - a cultured evening with lively discussion and a couple of bottles of Chilean Merlot. When they exited, they spotted A's older brother A2. Allegedly, since A's imprisonment, A2 had been throwing his weight around on the estate, seeking revenge for his brother's incarceration.
A2 was left unconscious in the street but CCTV footage had recorded the vicious assault. Very soon C,D,E and F were arrested, each of them later sentenced to two years in jail. As F was led away, he yelled at the police that it was their fault. If they had done their job and nailed A2, he would not be going to prison. That was F all over. A horrid, lazy student who never accepted responsibility for his wrong doing. Accidentally, the letter F is most appropriate for him.
When the police visited C's house, they found some drugs and a handgun which increased his sentence considerably. Rumour has it that he was actually the one who stabbed B to death in the first place. To tell you the truth, at school C was a much pleasanter lad than F. And I recall A's first day at my last school. His mother brought him into the "duty room" where I was supervising kids who'd been booted out of their lessons. She said we'd have no trouble with A - he was brighter and better behaved than A2 - but I was already noting his sneering dark eyes and wondering why he'd just been expelled from his first secondary school at the age of twelve.
I wonder if A,C,D,E and F will in the future attend a school reunion - perhaps ten years further on. Swapping photos and stories, delighting in memories of the "best days of their lives". Doubt it somehow.
- September 20, 2011