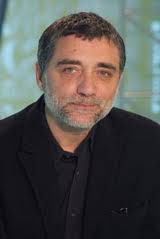 Courtesy of fellow Sheffield blogger - Lois at "Three Legged Cat", I was back at the Yorkshire Sculpture park last evening. I was there to witness a lecture by the Spanish sculptor, Jaume Plensa.
He came on the little stage wearing his hallmark black suit and shirt with his salt and pepper beard grizzled like an old mariner's. He is fifty five years and three months old as he informed the assembled audience at one point. Holding a slide clicker, his talk was linked to various images of his work which can be found in several major American cities, including Chicago:- 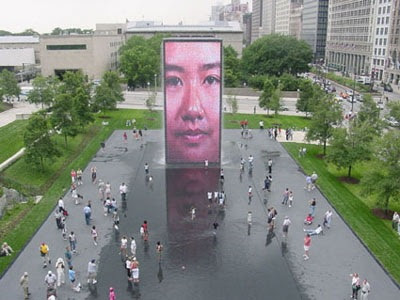 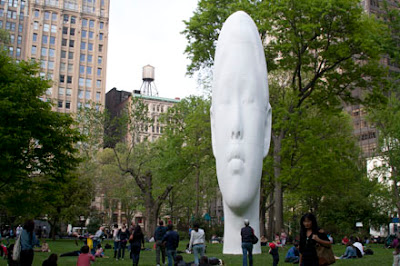 As well as the less cosmopolitan St Helens, near Liverpool where this giant head sits atop a former slagheap:- 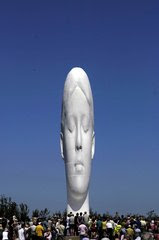 There are other works by Plensa in Japan, Switzerland, Sweden and of course his home country - Spain.
He is passionate about his art and keen to create pieces that touch the general populace - not just the highbrow elite. At the end of his lecture, questions were thrown at him by members of the audience. For example:-
HIGHBROW AUDIENCE MEMBER 1 (not me!): You have worked with a range of materials from marble to steel, water and concrete. I wonder Jaume, which material do you prefer working with and are there other materials you hope to work with in the future?
JAUME PLENSA The main material I like to work with is ideas. The materials pick themselves and are simply containers for my ideas.
HIGHBROW AUDIENCE MEMBER 2 (still not me!) What made you choose to become a sculptor rather than a butcher, a baker or a candlestick-maker?
JAUME PLENSA When I was a boy I wanted to be a doctor - maybe a surgeon. I guess that is kind of like a butcher...about understanding what it is to be human.
ME What is your favourite potato crisp flavour?
JAUME PLENSA Definitely salt and vinegar.
Later some members of the audience approached Plensa for autographs but I hurried off to Leeds to pick up our darling daughter who, I discovered, had fallen asleep in her new flat on Thursday evening , leaving a pan of pasta bubbling on the hob for about three hours. Needless to say, there was still an odour of pasta smoke in the air. I think she has learnt a new commandment: "Thou shalt not begin cooking and then lie down after boozy staff nights out!"
Thank you to Lois for the ticket.
- September 24, 2011