September 21st - the autumn equinox - but the weather forecast was promising so I grabbed my boots and camera and headed for the southeastern fringes of Sheffield. I had a lovely country walk from Ridgeway village over to Mosborough. Rolling countryside with woods and quiet hedgerows where the intricate botanical balances have been achieved over centuries. I saw squirrels, pheasants, grouse, horses and sheep. Farmers were still getting through their "to do" lists for September - fencing, harrowing, sowing winter crops. Where soil was exposed, it was drier than it should be at this time of year and occasionally little dust storms danced over the bare fields.
Over in Hackenthorpe, I spotted this scene, a small house beneath an electricity pylon:- 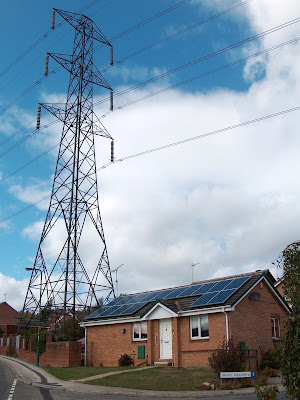 You can enlarge the photo by clicking on it. To tell you the truth, even if I was given that house for free, I wouldn't live there. There have been several studies over the years about health risks associated with living in close proximity to high energy power supplies and I am frankly amazed that the developers were ever allowed to build a house there.
But look more closely. Can you see that the owners of the little house have had solar panels installed on the roof? I find that rather odd. High above, power surges around the nation -mostly it's made from non-renewable fuels. Down below, somebody believes in a different kind of energy that rises over the eastern horizon every day and is for free. I wonder why someone who thought that way would ever choose to live beneath a pylon. And if you did have to live next to a great hulking pylon like that would you worry about it falling down? Would you give your pylon a pet name... perhaps Peter or maybe Monty. Monty Pylon!
- September 21, 2011