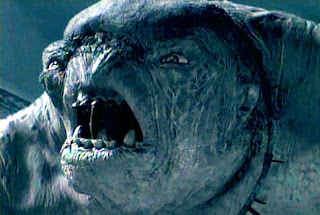 Recently, I became aware of a term I'd never heard before - "trolling". Though there seems to be some disagreement as to what actually constitutes trolling, it seems to describe making mischievous comments over the internet - comments that may be designed to antagonise, mock or "wind up" the original author. At its worst and most hurtful, trolling can lead to criminal conviction but it can also operate at lighter levels creating healthy amusement.
The Urban Dictionary site gives several definitions of trolling, including this one:- "Trolling is trying to get a rise out of someone. Forcing them to respond to you, either through wise-crackery, posting incorrect information, asking blatantly stupid questions, or other foolishness. However, trolling statements are never true or are ever meant to be construed as such. Nearly all trolled statements are meant to be funny to some people, so it does have some social/entertainment value."
This is another definition: "The art of reducing helpless nerds to tears over the internet."
Of course, in legend a "troll" is a nasty Scandinavian imp like figure that lives in caves and dark forests and plays unpleasant tricks on people. It was a troll that hid beneath the bridge as the three billygoats gruff clip-clopped over it. When I was a schoolboy, I had a little white rubber troll in my pencil case. He had purple hair and was less than two inches tall. I kept him for years but now he's lost. He looked something like this:- 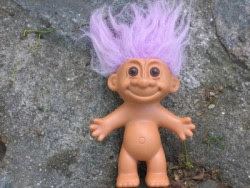 When visiting other blogs, I suspect that I have sometimes "trolled" when leaving comments after posts. Very probably, Mr John Gray, Mr S. Parrots, Madam Jennyta, Ms Blawat, Mr Plague and Miss Daphne have all from time to time been recipients of my "trolling" remarks. But if it so please your honour, I never meant any harm. I was only doing it for a laugh. Honest.
Perhaps we need a new term. Reserve "trolling" for remarks that are intended to be hurtful, inflammatory or downright nasty and for remarks that are little more than cheeky, non-malicious, light-hearted banter let's call it "rhubarbing" or maybe "plaguing". Any other suggestions?
- September 16, 2011