As long time visitors to this blog will recall, I am a keen contributor to an online photo-mapping project called "Geograph". Every week the website receives over six thousand new images and from them a shortlist of fifty pictures is drawn up. Next of all, the last "photo of the week" winner has the job of picking the new winner.
The judge for Week 36 was an amateur photographer called Walter Baxter who has taken many wonderful pictures in the Scottish Borders. So for him to pick one of my photos as "photo of the week" made the honour even bigger in my estimation. This is what Walter had to say about my picture of Newark marketplace:-
I liked it from the moment I opened up the thumbnail. The two foreground lamp standards save the day in what would otherwise be an empty space, but there are some folk going about in the background and the soft lighting has shown up the colourful buildings very well. Well done Mr Pudding and enjoy next week.
When Walter says "enjoy next week" he's referring to the fact that I will have to judge next week's shortlist. Anyway, this was my winning photo:- 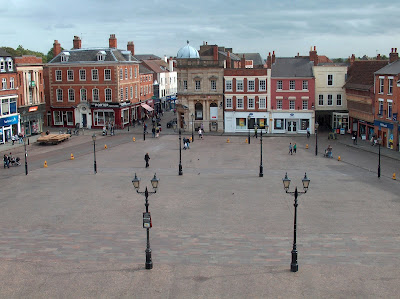