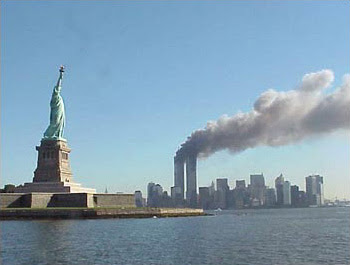 A bright September morning, very nearly ten years ago. The twin towers look like giant chimneys from this distance. What might they have been producing? Electricity? History?
I guess we can all remember what we were doing and where we were that fateful day. I was in a senior teachers' meeting in the Sheffield secondary school where I worked. During the meeting, we had no idea what was happening at the other side of the Atlantic Ocean but afterwards, one of the school caretakers told me that something had "gone off" in New York City.
I drove home to find my family glued to the television - like most English people that early evening. The horror of it fair took my breath away. To think that those hijacking killers could so callously plot to throw away their own lives so wastefully and be so cruelly disregardful of the sanctity of their innocent victims' lives - and for what? Some warped ideology. Some sick misreading of a holy book. The sheer wickedness of it was and remains astounding.
Sometimes commentators forget that the attack was on The World Trade Centre - a place where citizens of the world - not just America - congregated to negotiate, to trade, to oil the wheels of international business. Citizens of fifty six other countries died that day, including sixty six Britons. Perhaps ironically, at least thirty of the 2,606 twin towers victims were followers of Islam.
The world has known many natural disasters - earthquakes, hurricanes, volcanic eruptions, tsunmais, plagues and there have been a good number of manmade disasters - wars, factory explosions, famines, dams bursting - but the attack on the twin towers was somehow worse than all of them because it involved some of our fellow earthlings cold-heartedly preparing mass killing with the frontline terrorists casting their own lives aside like thistledown.
Ten years. It's a long time. All of our lives have changed since then. We have all grown older. We have seen family members and much loved pets die. Money gained and money lost. The comings and goings of friends. Promotion and demotion. Health issues. Work issues. Parties. Christmases and Eids. Dream holidays. Leaves falling in ten different autumns. And over it all has blown the dust cloud of that bright September morning, obscuring and yet clarifying our perceptions of life. Lest we forget.
- September 08, 2011