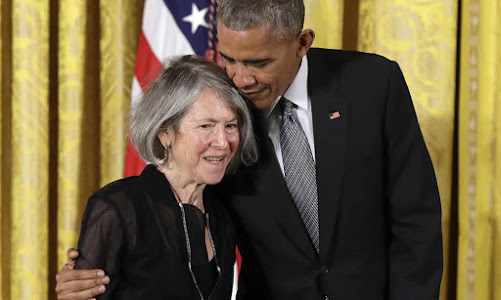 The winner of this year's Nobel Prize for Literature was the American poetess, Louise Glück (b. 1943). In the awarding committee's citation, they said this: "Louise Glück is not only engaged by the errancies and shifting conditions of life, she is also a poet of radical change and rebirth, where the leap forward is made from a deep sense of loss".
The Irish writer and critic Colm Tóibín said of her, "It is difficult to think of another living poet whose voice contains so much electrifying undercurrent, whose rhythms are under such control, but whose work is also so exposed and urgent".
Here's a typical example of Louise Glück's work:-
🍂🍂🍂🍂🍂🍂🍂🍂🍂🍂🍂🍂🍂🍂🍂🍂🍂🍂
Autumn
by Louise Glück

The part of life
devoted to contemplation
was at odds with the part
committed to action.

Life, my sister said,
is like a torch passed now
from the body to the mind.
Sadly, she went on, the mind is not
there to receive it.


The sun was setting.
Ah, the torch, she said.
It has gone out, I believe.
Our best hope is that it’s flickering,
fort/da, fort/da, like little Ernst
throwing his toy over the side of his crib
and then pulling it back. It’s too bad,
she said, there are no children here.
We could learn from them, as Freud did.

We would sometimes sit
on benches outside the dining room.
The smell of leaves burning.

Old people and fire, she said.
Not a good thing. They burn their houses down.

How heavy my mind is,
filled with the past.
Is there enough room
for the world to penetrate?
It must go somewhere,
it cannot simply sit on the surface—

Stars gleaming over the water.
The leaves piled, waiting to be lit.

Insight, my sister said.
Now it is here.
But hard to see in the darkness.