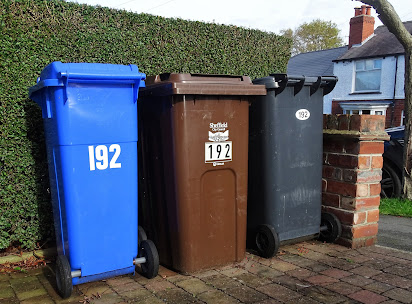 They stand like sentries on our front paving. Bins. The blue one is for paper and cardboard. The brown one is for glass, cans and plastic bottles. The charcoal grey bin is for general household waste.
The charcoal grey bin is collected by the local council every two weeks. The blue bin is emptied every four weeks and so is the brown bin. A few people in our street have large green bins too. These are for garden waste. You have to pay an annual fee for the green bins and they are emptied six times outside winter months.
I don't know how it is in other countries but in England household waste and recycling collections vary from city to city and from region to region. It is very frustrating. There should be commonality driven by government.
As well as the three "official" bins we have two more bins at the front of our house. Here they are:- 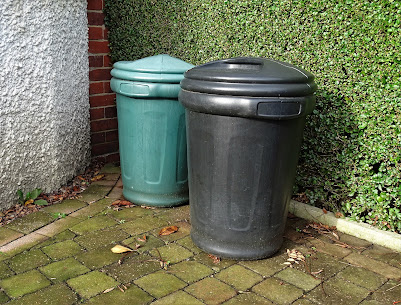 We have been using them for more than a decade now. I bought them myself. You are probably intrigued. What on earth do The Puddings put in those bins? Well let me take one of the lids off and show you:- 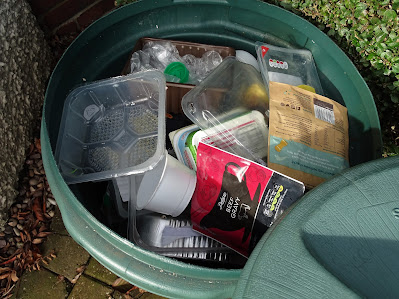 It's all the plastic waste that we are not allowed to put in the brown bin. Instead of chucking this in the general household waste bin, we collect it and then when the two bins are full I take them to one of our large local supermarkets where there are skips into which you can toss such waste. Most homeowners don't bother. They dispose of it in their charcoal-grey bins.
When Clint and I take our round bins, I make sure that it is as part of a shopping expedition. Just a short diversion. After all, it wouldn't make sense to use precious petrol just for a recycling trip. That would be something of an ironic contradiction.
There are a four rambling points I would like to make about those excess plastic bins:-
1) Local councils should be collecting all plastics - not just plastic bottles. I should not have to be going to all this trouble - month in, month out.
2) It's not clear what happens to waste plastic. Where does it end up? I don't want it to travel to Indonesia or Sri Lanka or China on ships. There should be full-scale recycling facilities closer to home. Has all our effort been in vain?
3) Local councils and their profiteering waste sub-contractors should be transparent about their procedures. They should be clarifying what can and can't be collected and explaining, for example, what is meant by "contamination".
4) Supermarkets and the businesses that supply supermarkets with products should be making a much bigger effort to reduce the enormous amounts of waste plastic that they are effectively responsible for creating.  It should not all be about making profit - there should be environmental  responsibility and action too - and definitely not just a bunch of empty words - paying lipservice to recycling.
Recently, the great David Attenborough was asked by a child if he would like to give people a message about the perilous state of our planet and his response was simply this: "Don't waste anything...Don’t waste electricity, don’t waste paper, don’t waste food. Live the way you want to live but just don’t waste".
It's a good message but we all need help to make it happen. We cannot do it on our own.
- October 21, 2020