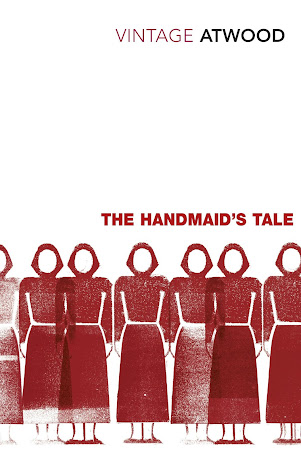 Though I had never seen film or TV versions of  "The Handmaid's Tale", I was aware of them. After all, Margaret Atwood's novel crept into our cultural consciousness some time ago.  Out of curiosity, I was keen to read it. Co-incidentally, I saw it amongst my daughter's university books when she was thinning them out. Frances's honours degree is in American and Canadian Studies.
"The Handmaid's Tale" is commonly referred to as a "dystopian novel". That word - "dystopian" is regularly connected with "1984"  and "Brave New World".  It means "relating to or denoting an imagined state or society where there is great suffering or injustice".
The narrator is a handmaid called Offred. We never learn her real name. In effect she is the property of a "commander" called Fred and her purpose is to become pregnant by him. Society has become patriarchal - almost medieval in character. There are daily executions and fear hangs in the air like mist.
I found the novel eminently readable and I loved the clever way that past and present were interwoven. Offred is a survivor and we feel her anxieties and her loneliness. There seems to be no way out of her situation. She is trapped, relying upon small mercies to get by.
When the story's action is effectively over, an afterword section appears in which readers are jettisoned even further into the future. A conference is taking place in which academics are looking back on  the dark interlude in North American history contained in the first forty six chapters. Audio cassette tapes were apparently found in a US Army  footlocker - containing the handmaid's tale.
I found this device unnecessary and difficult to accept. After all, the grammar of Offred's tale had never had an obviously oral quality. It did not seem anything like a transcript.
Yes. I could have done without that end section. Nonetheless, I enjoyed Margaret Atwood's novel. Each time I returned to the book, I looked forward to getting through three or four more chapters. The vision of the future was both convincing and chilling, containing many echoes of more current times.
I  conclude this short review with a fragment of the novel:-
“What I need is perspective. The illusion of depth, created by a frame, the arrangement of shapes on a flat surface. Perspective is necessary. Otherwise there are only two dimensions. Otherwise you live with your face squashed up against a wall, everything a huge foreground, of details, close-ups, hairs, the weave of the bedsheet, the molecules of the face. Your own skin like a map, a diagram of futility, crisscrossed with tiny roads that lead nowhere. Otherwise you live in the moment. Which is not where I want to be.” 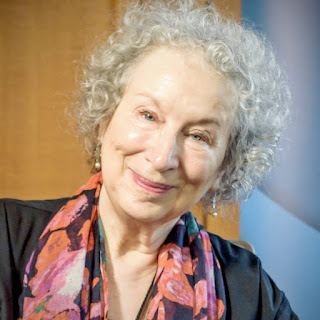