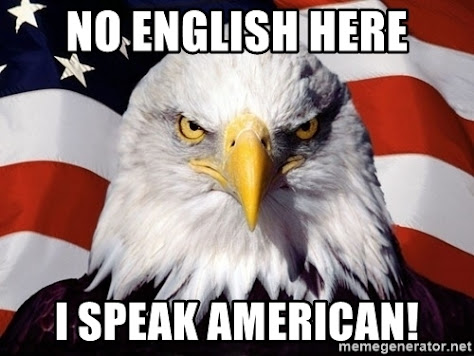 I received the following supportive comment from "Terry" in response to yesterday's blogpost:-

It's nice to have an observant reader like Terry who notices the small detail of one's humour.

Terry's remark reminded me of  certain encounters I had in the state of Ohio when I was a summer camp counsellor there in the mid-nineteen seventies.

One night I fell into conversation with a couple of local redneck guys (English: Conservatives) in "Skip and Ray's Bar" (English: pub) by the road to Burton, east of Chagrin Falls.

They had noticed my English accent. One of them asked where I was from so I told them. They seemed a little puzzled to learn that other countries existed beyond the shores of The United States.

I informed them that they in fact spoke the English language and that it originated in England.

One of them - let's call him Bob - visibly bristled and protested, "I don't speak English. I speak American!"

His pupils enlarged dangerously. He was clearly a proud patriot, affronted by the idea that the very language of his land of sidewalks (English: pavements) and cottoncandy  (English: candyfloss) was borrowed from another country.

Who was I to persuade him otherwise? Just a cleverdick limey bastard ordering another pitcher of beer, hoping that Bob did not have a rifle  in his pick-up truck (English: a small vehicle with an open part at the back in which goods can be carried).
Of course, I am aware that  the kind of Americans who visit this lil'ol' blog tend to be better educated and  more knowledgeable about the  wider world than Bob  appeared to be. As I recall, he and his buddy (English: friend)  worked in land drainage, moving earth and digging trenches from dawn to dusk.  The salt of the earth. You have to respect people like that. We need them.
- October 28, 2020