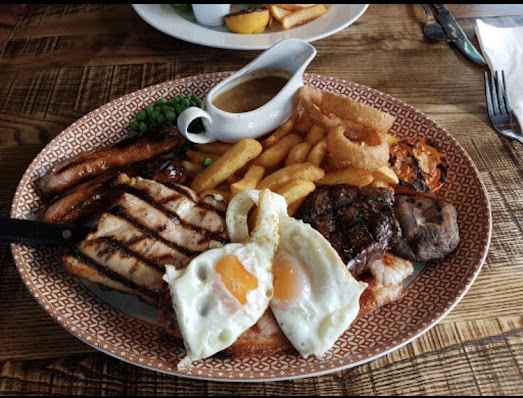 The meal at "The Robin Hood" down at Millhouses went better than expected. Shirley and I sat at one table while Frances and Stewart sat at another table - two metres apart. Fortunately, we were  the sole occupants of a large alcove and were able to talk freely. We were attended to by a lovely waitress whose friendly demeanour enhanced our dining experience in these strange times.

You were meant to order from a smartphone app but I told our nice waitress that I don't own a mobile phone so she kindly brought paper menus for us.

After my long walk in Nottinghamshire I was hungry. I had only had a banana and an apple for my lunch. I checked out the menu and noticed this:-

All of our steaks are expertly aged for depth of flavour and served with seasoned chips, grilled tomato, flat mushroom, garden peas and crispy onion rings.

Well, I hadn't eaten a mixed grill in years and I was so sorely tempted that I confess I submitted to the temptation. My apologies to any disgusted vegans  (i.e. our son Ian) who may be reading this post. It was a plateful I can tell you and towards the end of my  gluttonous munching  I admit that I regretted going for the larger steak. Uncharacteristically, I even  failed to clear my plate.
All four of us enjoyed our meals and drinks so much that we booked a return visit next week. By the way, we also had desserts. Mine was a Belgian  chocolate brownie with vanilla ice cream.
It was nice to catch up with the beloved daughter and her handsome husband. Being in Tier 2 has been difficult enough but today South Yorkshire begins its phase in Tier 3 . We do not know for sure how long Tier 3 restrictions will last but I guess we will be in it throughout November.
What  the hell will Christmas be like this year? Remember Christmas 2019? We had absolutely no idea what lay ahead of us - just round the corner. Will we ever get back to something resembling the old life - the life that we knew before and often forgot to love? We took it for granted.
- October 24, 2020