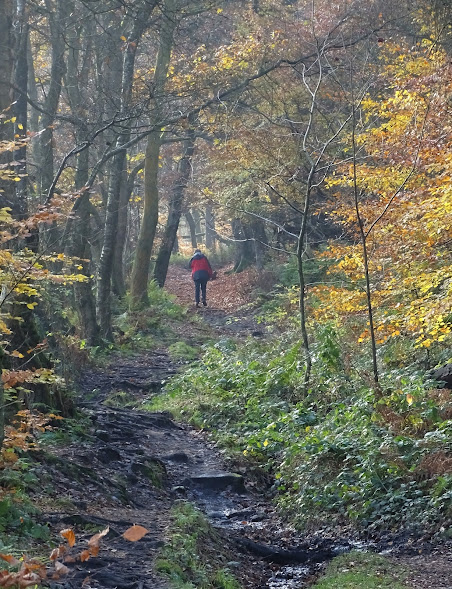 Within the boundaries of The City of Sheffield there is a surprising amount of woodland. This afternoon I was in Blacka Plantation on the city's southwestern fringe. I snapped the picture above believing that the presence of the red-coated rambler would give the autumnal image more interest.
I also took the following photograph of a sheep taking a break from her favourite pastime - munching grass. On average, sheep spend seven hours a day grazing though this will depend on the nutritional value of the grass they are eating. It is harder to derive nutrients  from rough moorland grasses than fertilised lowland pastures. 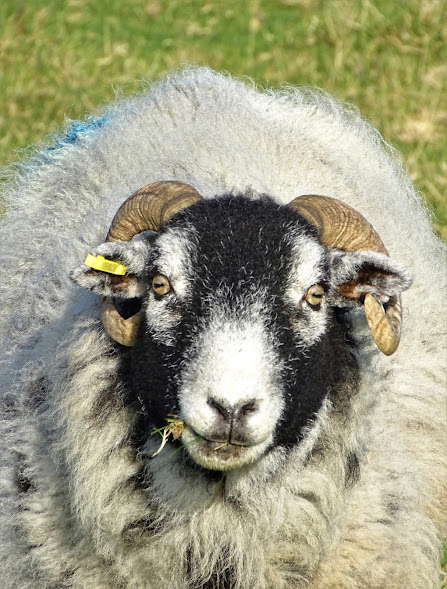 Back at Pudding Towers, I returned to the re-decoration of the dining room.  I was painting the skirting boards while lying on my belly. At the age of sixty seven I have to admit that I am not as lithe and nimble as I used to be. Just getting up off the floor has become something of  a physical challenge. Previously, I would have leapt up like a gazelle. Now I am like a sealion on some Scottish island flapping my flippers and even making seal-like noises as I struggle to get back up on my feet. So it goes.
Meantime, across The Atlantic Ocean, in the US marathon event for senior citizens, Young Joe has overtaken The Big Baby and the finishing tape is now in sight. Come on Young Joe! You can do it! Oh dear - The Big Baby has stopped in order to stomp his feet and cry, "It's not fair!" There there Big Baby!
- November 06, 2020