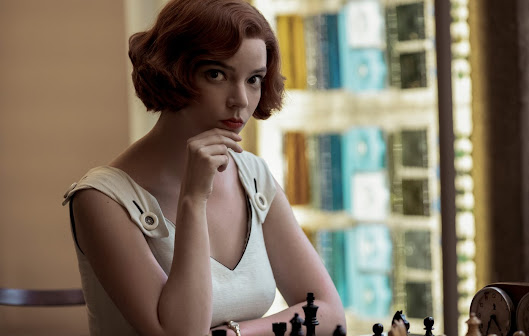 Anya Taylor-Joy as Beth Harmon in "The Queen's Gambit"

On Monday night, Shirley and I finished watching the seventh and last episode of "The Queen's Gambit" on Netflix. We thoroughly enjoyed the series having been led to it by a number of people including Sue in rural Lincolnshire and Mary in northern Florida.

The drama follows the stellar career of an American chess genius called Beth Harmon. Played brilliantly by Anya Taylor-Joy, Harmon is a troubled soul who grew up in an orphanage and developed addictions which included an all-consuming obsession with chess.

I will refrain from  providing any more details of the plot as I would not wish to spoil your viewing experience if you have not yet seen "The Queen's Gambit".

What I will say is that as well as being gripped by the story which is based on a 1983 novel of the same name by Walter Tevis, I was also entranced by the appearance of the drama. There was an inventive quirkiness about it all and some of the cinematography was very clever. I loved the way that Beth Harmon walked - like a cat gliding along but aware of everything around her. At times the colouration added subtly to the 1950's/60's feel of the settings.

Was it based on the life of a real person? I researched this via everyone's best friend - Mr Google. He told me - no, not really - but the writer once said that there is a lot of Bobby Fischer in Beth Harmon. Fischer (1943-2008) was also a child chess prodigy who went on to beat the Russians at their own game. Like Harmon, Fischer was similarly reluctant to dance to anybody else's fiddle and outside the precincts of chess was also adept at putting his big foot in things.