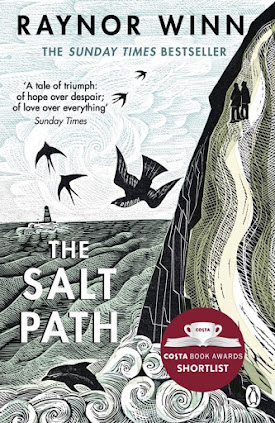 It took me five days to read "The Salt Path" by Raynor Winn. And what a delight it was!

It is a true story about a long distant walking route in the south west of England. Beginning at Minehead in Somerset, the "salt path" or South West Coastal Path hugs the coast through Devon and Cornwall all the way to Land's End where it turns and heads east along the south coast to Poole in Dorset. Six hundred and thirty miles in total.

in 2014, Raynor Winn and her husband Moth became unexpectedly homeless. They were in their early fifties. What could they do? Despite Moth having a life-threatening condition they decided to set off walking.

They had very little money and only basic equipment, including two cheap sleeping bags. Some days they had nothing to eat and they wild camped almost all the way just to save money.

On the walk they discovered inner reserves of strength and they witnessed Mother Nature in various guises - from nocturnal badgers to Atlantic storms and from baking sunlight to cliffs abundant with fossils. It was a journey of self-discovery.

Raynor Winn's style of writing is honest, easy and observant. She focuses on small aspects of everyday life. Her love for Moth is like the chain on a mighty anchor and though times get tough she retains a priceless positivity.
When it comes to reading, we all have our own individual preferences. Maybe some would dismiss "The Salt Path" but I loved it. In this year of COVID 19 and worrisome uncertainty about the future of our planet, it was great to read a book that was so uplifting.
Though Raynor and Moth had nothing, they found something so special. Maybe there's a message there for the rest of us.
- November 19, 2020