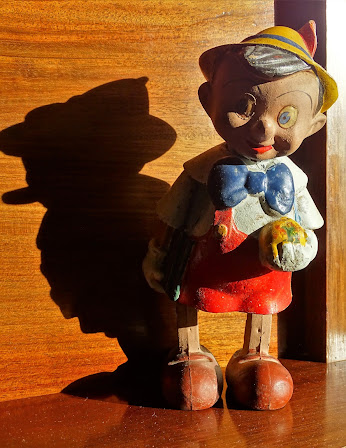 Looking up from my leather La-Z-Boy throne on Sunday morning, I noticed how splendidly sunlight was spotlighting our old model of Pinocchio. He stands on the rosewood mantelpiece in our front room but for many more years he resided in my mother's display cabinet where she kept a variety of fascinating treasures.

I guess that everybody associates Pinocchio with lying. His lies caused his wooden nose to grow but in the end he learnt the errors of his ways and his embarrassingly long snout shrank back to more normal proportions.

Pinocchio's lies were never malicious. It could be argued that they were rather typical of the kind of lies that little boys and girls tell as they develop their moral senses and how to function acceptably in this social world. Ultimately, lying impacts upon our sense of self-worth though there are arguably situations in which being economical with the truth is the wisest way to proceed.

Do you lie? How do you feel about lying?

One of my pet sayings is "Honesty is the best policy" and for many years it has been one of the guiding principles of my daily life. I sleep better in my bed and feel better about myself because of this.

Last week when walking between Everton and Gringley-on-the-Hill, I passed through a sea of ripened maize. I visualised boiled golden cobs steaming in bowls, slathered with salted butter and reached out to twist one of those cobs from the mother plant. Surely, the farmer wouldn't miss four corn cobs would he? I was about to take my "Converse" rucksack off my shoulders and put ripe corn cobs inside it when a voice inside my head said "No!"

I felt better about myself as I walked on minus the corn, realising that future munching upon stolen cobs would not sit well with me.  As I have discovered before, it is better for my mental well-being to live as honestly as possible. Replaying lies and small acts of dishonesty would be tormentuous.

None of us are saints. As human beings, we err and if you peel away the layers you will undoubtedly find that no one  is immune from lying - not even The Pope or The Archbishop of Canterbury. We might avoid the corn but deeper than that, deep inside what lies might we find?

There's more to the original Italian tale of Pinocchio than initially meets the eye.