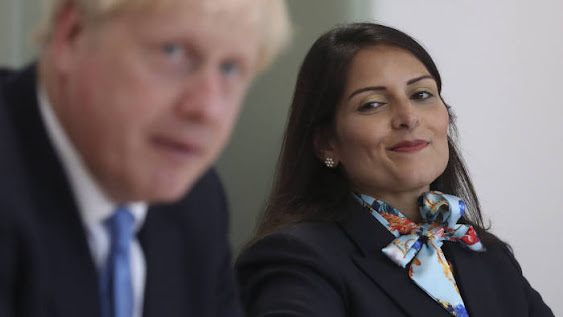 Priti Patel  is Britain's Home Secretary. She was appointed by Feckless Johnson. Numerous complaints were made about her style of leadership - so many complaints that an official inquiry was undertaken.

That inquiry concluded that Ms Patel was at times guilty of bullying behaviour in her department - including shouting and swearing at members of the civil service. Historically, such a damning judgement would result in the spotlighted politician resigning or being fired. However, Priti Patel has neither resigned as a matter of honour nor has she been given her marching orders by Feckless Johnson.

Instead what has happened is that the senior member of the civil service tasked with actioning this inquiry has himself resigned his post. Undoubtedly, he is quite disgusted about Feckless Johnson disregarding the inquiry's findings. That fellow is called Sir Alex Allen and I applaud him for doing the right thing.

Following receipt of the inquiry's report, Feckless Johnson said he had "full confidence" in Ms Patel and that she had given a "fulsome apology". Fulsome apology? What the hell! This is what Priti Patel said:-

"I am sorry if I have upset people in any way whatsoever - that was completely unintentional."
Is that a "fulsome apology"? It does not sound like one to me. It sounds like the kind of "apology" that someone might say when they don't truly wish to apologise. It's like saying "I am sorry if you feel that I was in the wrong" - throwing it all back at the complainant - as if it was their fault in the first place.
A proper "fulsome apology" would have gone something like this: "I apologise most sincerely for my past behaviour. It was wrong of me to shout and swear at members of staff.  I shall try harder from now on to alter my managerial style and cease any swearing or shouting - even when we are dealing with stressful issues and time pressures. I should like to thank Sir Alex Allen for conducting his inquiry in  a characteristically professional manner."
Feckless Johnson didn't have the political nous to sack his senior adviser Dominic Cummings when he blatantly broke coronavirus lockdown rules in  early summertime. Now he has again shown a streak of his unlovely stubbornness - instead of doing what's right and proper. He hasn't  even released the report for others to examine.
You will now be pleased to learn that this particular parochial rant is over. My sincere and undying apologies to North American visitors, readers from Australia, New Zealand, Germany, Ireland and Eswatini (the new name for Swaziland). Sorry... I really mean it.
- November 21, 2020