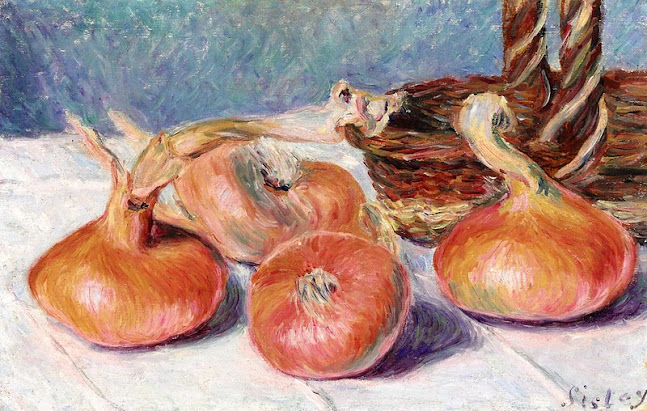 Where would we be without onions?

The onion is a nutritious, easily stored and adaptable vegetable that plays vital roles in a wide range of cuisines.  Furthermore, onions are pretty easy to grow and succeed in lots of different growing conditions.

Where did they come from? The general consensus is they originated in central Asia from where, around 7000 years ago, they began to fan out with mankind's assistance around the known world. Onions were present in the cuisine and indeed the mythology of Ancient Egypt.

When pilgrims emigrated to North America aboard "The Mayflower" in  1620, they took seed onions and planted them by their Massachusetts cabins. Later it was discovered that some Native American cultures were already growing and using onions. How had they arrived there from central Asia?  Most probably over the land bridge that once linked north eastern Russia with Alaska. After all, that is the route via which the earliest human migrations into North America happened.

When I roast a joint of meat or a chicken, I always layer the bottom of the roasting pan with chopped onions. Later they will make a perfect base for creating tasty gravy. Sometimes I boil onions or roast them whole but I think that frying is my favourite way of using onions. I fry them slowly in olive oil and butter, turning them occasionally to avoid any burning until they are brown and scrumptious. They benefit from a little seasoning during this cooking process.

The fried onions are great with steak, homemade rissoles or burgers and its nice to be generous with them. After all, onions are inexpensive.

My favourite member of the onion family is the leek but that is another story.

God bless onions! The Lord may have screwed up with unmentionable diseases and "the problem of evil" but onions remain a huge success even though they are mostly taken for granted. As I said at the start: Where would we be without onions?