One day, when we were in south west Scotland, we took a detour to Dumtroddan Farm. We left Clint near the farmhouse and walked through a couple of gateways into a  cow field. Near the centre of the field there were two fenced off areas and within them there were low-lying rocky outcrops. There was another fenced off area on the edge of adjacent woodland and within this there was a similar outcrop.

Why the iron fencing? Well it was a means of protecting some very special rock carvings. Though four thousand years may have passed by, you could still make out the patterns left by Bronze Age people. They are known as "cup and ring" carvings and similar patterned stonework can be seen in numerous locations in Scotland, northern England, Wales, Ireland, northern Spain, Brittany in France and indeed much further afield. 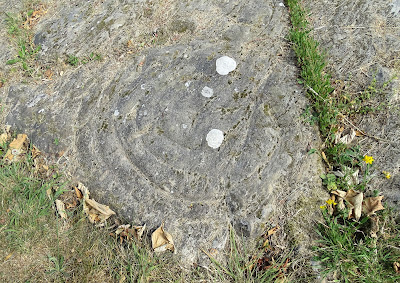 Just wo of the cup and ring carvings at Dumtroddan 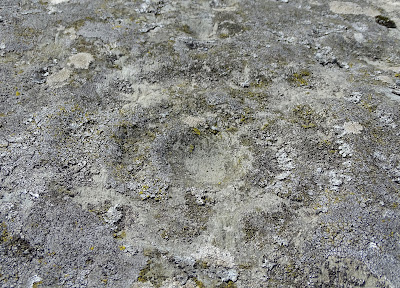 Nobody knows why the carvings were made. Did they have some religious significance? Were they about marking territory? Were they connected with rituals or arithmetic? We can only guess though various theories abound.

Back home in Sheffield, I learnt that some very old stone carving has been found on a rock in Ecclesall Woods - about a mile from our house. Archaeological experts have concluded that this rock was also carved during The Bronze Age - perhaps 3500 years ago. Yesterday I went looking for it.

I knew roughly where to find it though it isn't close to any of the woodland paths. With a bit of guesswork and scrabbling through undergrowth I finally located the little clearing in which this historic rock sits. It was carved long before Jesus Christ, The Lord Buddha or Muhammad were even dreamed of.

I ran my fingers gently along the lines in the rock and wondered about the men who carved it. They would have had no idea that their handiwork would last so long - nor would they have ever imagined that a 21st century schizoid man would one day pause amidst the trees to think of them. 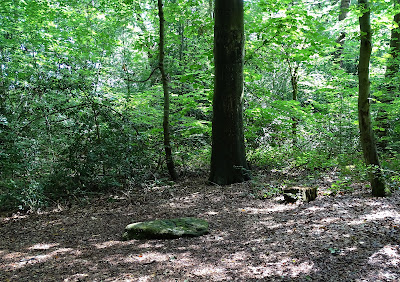 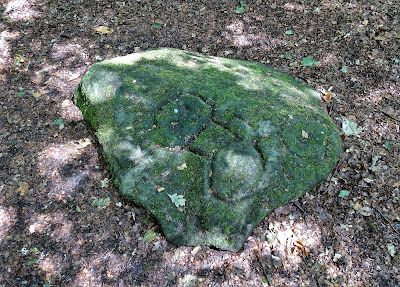