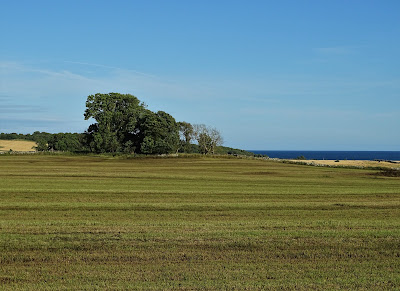 You don't have to be mad to work here but it helps.

After our evening meal on Thursday, Shirley just wished to lounge around reading after putting a few items of laundry in Slipway Cottage's washing machine. On the other hand, I still wanted to be out there in the evening sunshine.

On my Ordnance Survey map I had spotted the site of an abandoned church about a mile north of here. In Old English style lettering the site was marked as "Kirkmadrine - Remains of". Intriguing. And the site was a good distance from any lane or path with no houses nearby. Why would anyone build a church there?

Perhaps there was a community there long ago. Perhaps there were tracks that led from surrounding farmsteads and crofts - long disappeared. Perhaps the rising ground on which Kirkmadrine was built was a place of pre-Christian significance. By the way, this Kirkmadrine should not be confused with any other Kirkmadrine in the region. It is not the only one.

Aerial imagery and Google Streetview helped me to plan my evening adventure. I  parked Clint in a gateway on the lane that leads to Innerwell. I had hoped to stroll across the adjacent field but it had been sown with wheat so I had to skirt round it.

Then I had a barbed wire fence to negotiate before following a wide green track that nobody walks. Galloway cattle came sprinting up to the fence to see me led by my bovine stalker - Penelope who is standing in the middle of the group. 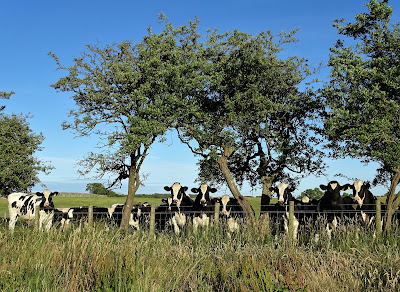 Two hundred yards further on there was another fence to climb over. Ouch! And then I was into a recently mown wide meadow  that had been sprayed with manure. It was easy to walk across and there ahead was the site of Kirkmadrine Church.

I didn't know what I might find amidst those trees. There was no roof and the primitive building had largely tumbled down but there was a doorway with a stone lintel above and there were some gravestones too. One was the grave of a naval captain and there was a date upon it - 1876 - not so long ago. 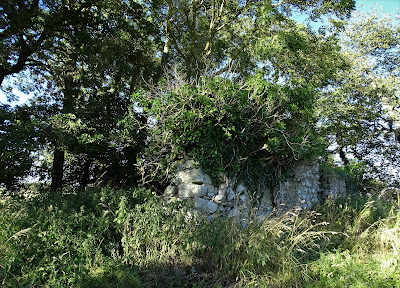 Before heading back to Clint, I lingered a while in that ancient place and tried to imagine how it would have been long ago before the defunct parish of Kirkmadrine merged with the parish of Sorbie and became largely forgotten. Plodding back across the fields I felt rather elated to have spotted that remote site and to have actually been there and seen it with my own eyes. Bloody marvellous! 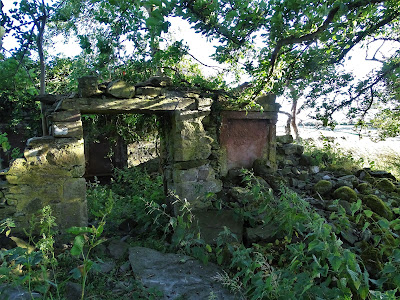