It's funny how one thing can lead to another. Going back to the old and forgotten church at Kirkmadrine - I snapped a couple of pictures there - of a gravestone still secured to one of the church's ruinous walls. Last night I deciphered the various inscriptions. This is what it said:-

Clearly Captain McKerlie of the Royal Navy had done pretty well for himself. After erecting a memorial to his parents he went on to reach the exalted rank of a Rear Admiral.

Though I have not been able to track down an image of John McKerlie, I have discovered several things about him. He was a national hero and a close colleague of Lord Nelson. McKerlie fought at The Battle of Trafalgar and in an earlier military skirmish off the coast of Brittany he was aboard "The Indefatigable" when successfully assaulting the French ship "Les Droits de l'Homme". A painting of this event is displayed in the Brest Museum of Art in France:- 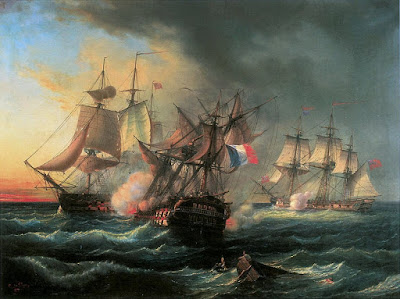 Though losing his right arm in this bloody encounter, McKerlie carried on his illustrious career and retired to Garlieston where he became involved in merchant shipping. He married Harriet and they had one daughter, Lillias, who wrote to "The Spectator" in 1914:- 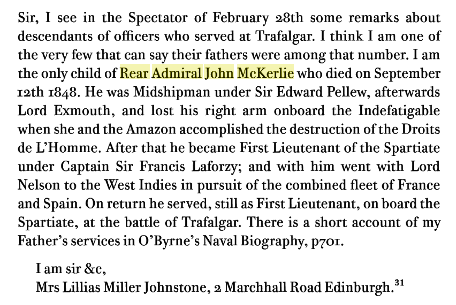 Another interesting thing I have found out about McKerlie is that a memorial brooch was produced in his memory - containing a lock of his hair. Perhaps it was worn by his wife, Harriet and maybe Lillias inherited it. Anyway, it was sold fairly recently by The Armoury of St James's.

In his time, John McKerlie was a significant national figure. It is a little sad to think of him lying in that forgotten churchyard visited only by crows and occasional wood pigeons. No more the cries of men in pain nor waves battering the bows of "The Indefatigable" nor cannonballs booming. Now all is quiet.
- July 08, 2018