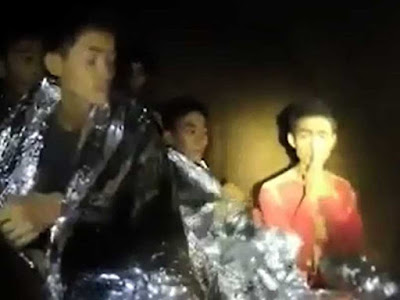 What a very heart-warming story! The Wild Boars boys' football team have been rescued from the Tham Luang Nang Non cave system in Chiang Rai province, northern Thailand. It is a tale of international co-operation, determination, bravery and caving skills. The whole world has been watching and collectively we let out a huge "hurrah" when we learnt that all of the boys were finally out. It was the best of humanity.

But what of Yemen? There are children there too. They may not be trapped in a treacherous cave system and the fickle media, like the U.N. may have turned its back on them but their lives are also endangered. In fact, countless children have already died there - from Saudi Arabian bombing, starvation and cholera.

They are not sitting on a ledge in the darkness. After all, how could such a ledge accommodate literally thousands of Yemeni children? And as I say, the media are not waiting on the edges of bombed out towns and villages to bring the latest news. There are no "live updates".

Far more than 10,000 civilians have already died in Yemen and in November of 2017, the Save the Children organisation estimated that 130 Yemeni children were dying every day as a direct result of the conflict. Not thirteen - like the cave group in Thailand - but 130 - per day! The secrecy surrounding the conflict in Yemen goes on just as the western world continues to supply Saudi Arabia with the military hardware it needs to force its will upon the beleaguered Yemeni people.

The background to the conflict is complicated but the simple reality is that children are dying. So yes - let's cheer for the Thai boys that the media chose to bring to our television screens - but please spare a thought for the forgotten children of Yemen for they are also human beings.