Last evening I sat on my backside for two and a half hours staring at our television set. England were playing Croatia in the second World Cup semi-final. The match was beamed live from Moscow.

There was such hope, such expectation and our young team had gradually won the nation's hearts. These lads were proud to be English, proud to represent their country and they were together - a proper team led by our dignified and articulate manager - Gareth Southgate.

Gareth lives in North Yorkshire and the back line of our defence consisted of  three Yorkshiremen. Shirley used to work with Kyle Walker's mother and I met him at her wedding when he was about ten years old. He was a little devil. Harry Maguire, who spent two seasons at Hull City, is from Mosbrough in Sheffield's southern suburbs and John Stones is from Hoylandswaine near Barnsley.

When asked about this Yorkshireness in England's defence, Harry Maguire smiled and said, "We might not have much skill in Yorkshire but we're hard!"

Anyway, the first half of the semi-final was dominated by England. Kieran Trippier - from Bury, Lancashire - scored a superb goal from a direct free kick. However, our dominance meant that at halftime we should have been going in two or three up, not just one-nil. I have learnt that in football you must take your chances when you are on top or the other team will come back to bite you.

Croatia equalised in the 68th minute and the game headed into extra time. With the teams tiring we gave away a sloppy goal with ten minutes to go and soon it was all over. Football was not coming home after all. In place of elation there was a hollow feeling but like most true football supporters I feel proud of  England's performance in this World Cup. They played with passion and pride and gave it their all. You cannot ask for more but next time, next time... perhaps the manager will pick eleven Yorkshiremen and not just the three in defence. 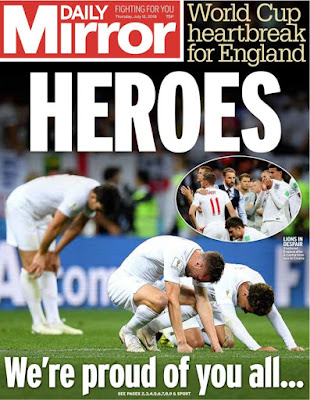