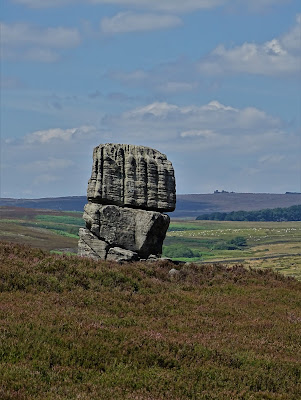 I love to visit stone outcrops on my rambles. The one above lies to the west of Sheffield, overlooking the A57 road near Hollow Meadows. It is called The Head Stone. Often I wonder what ancient inhabitants of this land would have made of  such an outcrop. I can't help imagining that it if not somehow revered, it must have been a focal point for them. Below you can see The Head Stone from a different angle. The pictures were taken yesterday afternoon. 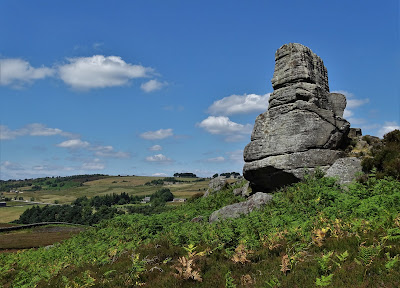 Before I reached The Head Stone I had climbed up from Wyming Brook Drive and along Reddicar Clough through swathes of bracken, noticing that there were  thousands of bilberries waiting to be picked. I ate a handful and wished I had brought a container to fill.  They would be very nice scattered on one's morning bowl of muesli.

On the slope to my right I noticed a small unnamed stone outcrop and as I scrambled through the bracken I guessed that it would have been good a place for ancient hunters to rest or base themselves in distant times gone by. They would have had a good view of the valley below and the area around the stone would be dry and solid. They could have left or stored things here and might have even made temporary camps.

See the big millstone slab to the left... 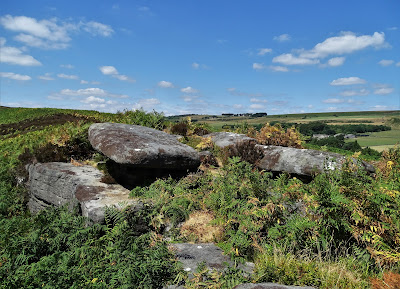 I looked underneath it and what I saw was a crude collection of rocks above a secret hollow. The rocks appear to be holding that two ton slab in place. As I say, I have investigated many stone outcrops but have never noticed such an undercarriage before. It crossed my mind that what you see under that great slab is not natural. The rocks may well have been placed there by human beings. Had I stumbled across a burial place?

It is very possible that this place has never been subject to archaeological investigation. It is a good distance from any passing public footpaths and though I am sure that grouse shooters and other walkers have been there perhaps none of them considered why that slab of stone has a bunch of rocks beneath it.  I am going to refer my questions to The University of Sheffield's Department of Archaeology. 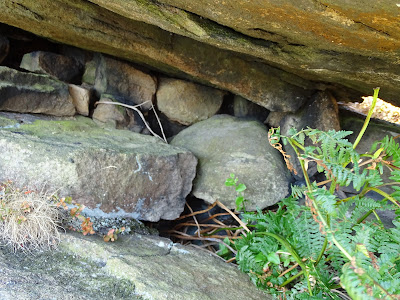