The outside world may have its problems but we are on The Machars of south west Scotland having a spiffing time. Did I just dream Donald Trump? Does Brexit really exist? Is Yemen really dying?

I don't care any more because the sun has come up in another cobalt blue sky. Gulls and fourteen swans are in the bay waiting for the next high tide. Where shall we go today? Perhaps to The Isle of Whithorn which isn't really an island at all. Perhaps to Wigtown - Scotland's book town and once the county town of Wigtownshire - now absorbed into the administrative region of Dumfries and Galloway.
Yesterday your hardy correspondent donned his swimming shorts and ventured into Luce Bay from Monreith beach. The Rhins of Galloway lay stretched out mistily across the aquatic horizon - twelve sea miles away. I swam for no more than ten minutes. In spite of The Gulf Stream it was chilly man. One's nether regions were shrunken. This wasn't Corfu.

We had spent three hours in Whithorn where the mysterious St Ninian built Scotland's first Christian community in the fifth century. Later he became a medieval cult figure and for many God-fearing Britons, a pilgrimage to his shrine was vital. By visiting it you gained credit on the path to the afterlife and besides - St Ninian was reputed to be a healer - bringing relief to the infirm. Thousands arrived at his shrine from all over Scotland,  Northumbria and beyond.

It is easy to forget how it was.
We met Mick at the wickerwork gate that leads along a path to the reconstruction of an Iron Age round house. Its design is based entirely upon archaeological evidence drawn from the site of an actual round house found in a former lake in swampy ground but three miles from Whithorn. Mick was very passionate about Iron Age history. It was as if it had all happened just yesterday. 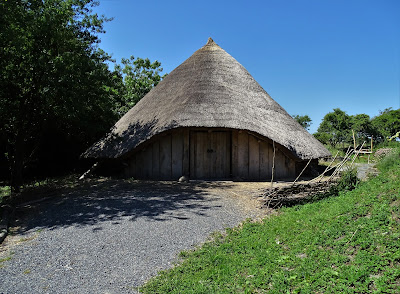 We also met lovely Rory in the museum which houses several ancient crosses and other carved stones from the early Christian era. Rory clearly suffered from mild cerebral palsy but he had been to The University of Dundee - acquiring a degree in history and politics. He was slightly disconnected from the so-called real world. He thought The Lincolnshire Wife would qualify for a senior's ticket and was extremely apologetic and embarrassed when he realised his error. No problem Rory. 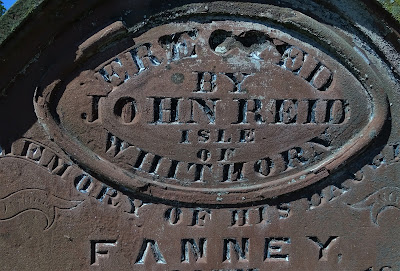 It's almost eight o'clock now. In a moment I shall put the TV news on to see what is happening in the strange world beyond this summer reality. They say that the heatwave will continue for another fortnight. What a wonderful time to be here on The Machars.
- July 03, 2018