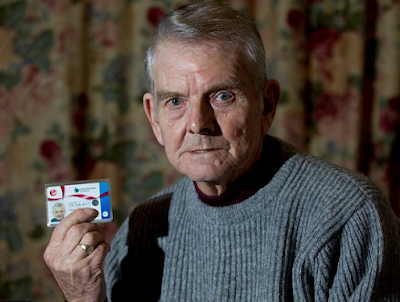 Hello. It's me again. Back home in sun-baked Sheffield. The lawn looks as though it belongs in the south of France - parched and yellowy. By the way, if you are thinking that that's a picture of me above you are wrong. It's just a random old fellow holding his bus pass.

Before we headed up to equally sun-baked Scotland our garden received a damned good watering and fortunately the vegetables survived seven sunny days without Farmer Pudding's intervention. Our potato plants are just about ready to dig up though I am expecting tiny tubers because we have had six weeks now without a  drop of rain. The courgettes, runner beans and French beans are all doing well but Lord knows what has happened to the peas. It's as if they haven't flowered.

The raspberry bushes in the top corner have borne hundreds of raspberries but their growth has been stunted owing to these drought conditions. We went to a fruit farm near Holmesfield yesterday afternoon but their raspberries were very sparse. When we went last year you could pick a punnet of plump and juicy raspberries in ten minutes or so. Not this year.

There was an envelope waiting for me when I got home. It contained my "senior" bus pass which means that I am now officially an old git! Now you can understand why I posted that photograph at the top of this post. The pass will entitle me to travel anywhere in England on public buses free of charge. After working at Oxfam on Wednesdays I usually catch a bus back home. Normally that ride cost me £1.20 - or £62 a year. Now that money will be saved. Strangely I won't be able to use the pass in Scotland though Scottish "seniors" can use their passes in England. Most unfair. Seniors are also not allowed to use their passes before 9.30am which suits me just fine.

If you think you have seen the last of my pictures from south west Scotland, think again. This blogpost is just a delaying tactic. More pictures for your edification tomorrow.
- July 09, 2018