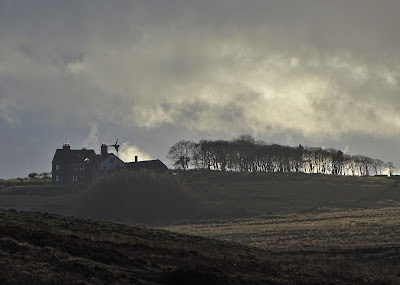 Shirley has a smartphone. She often uses its camera facility. Perhaps accidentally, the resulting pictures will frequently finish up on the hard drive of this computer. How that happens I do not know but what I have discovered is that she never edits these pictures or deletes any of them. In fact, I don't think she realises that they are there - building up like logs in a Canadian river..

Perhaps I should explain to her how to review these pictures and sort them out. Sometimes there will be twenty pictures of the same scene - taken in such rapid succession that they appear like a moving film. I think her finger sometimes sits on the camera button when it should be removed and the result is these multiples of roughly the same image.

Anyway, this Sunday morning I woke up far too early and came downstairs to kill time on the laptop. I found myself looking through some of Shirley's accidental smartphone files and picked out three of her photographs to accompany this post.

At the top you can see Stanedge Lodge - the highest residential property within Sheffield's city boundaries. I rather like that picture. It might as well be Emily Bronte's Wuthering Heights, located similarly on a moortop. Stanedge Lodge was built in the nineteenth century as a base for upper class grouse shooters.

Below - back in 2014 - there's our old friend Fred Fox brazenly sitting on one of our privet hedges in the middle of the day. Though Fred is now in fox heaven, he is not forgotten. Little did he know that I would spend countless hours painting his image. You can see paintings of him in Florence (South Carolina), Coussa (France), Wood Green (London), Ludwigsburg (Germany), a little town in southern Sweden  whose name I forget and a couple of other American towns whose names also escape me. 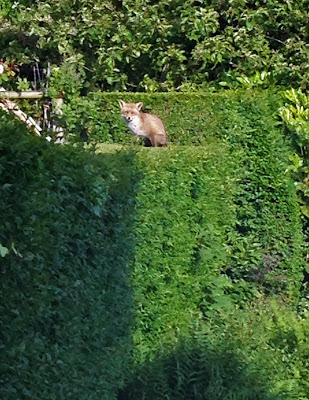 You don't see many pictures of me in this blog. That's usually because I am behind the camera. Customarily I avoid being the subject of photography but I like the picture below that Shirley snapped in Gran Canaria back in September 2014. Clearly, I am relating an amusing tale and our Ian's body language suggests that he is gripped by my lively narration There is obviously nowhere else he would rather be than in  that family restaurant in Maspalomas... In truth, he really enjoyed that late summer break and didn't at that moment foresee that his exciting "Bosh!" ride was about to begin. 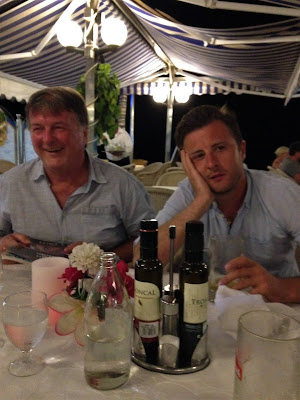