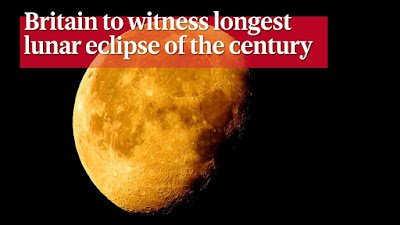 Back on August 11th 1999 a total eclipse of the sun should have been visible from the south west of England. I was all set to drive down there with my son and daughter but the weather forecast was unpromising and indeed on the day in question the country was pretty much shrouded by thick cloud. I was glad I cancelled the plan

Fast forward to yesterday night. Astronomers told us that an impressive blood moon would rise in the south east at around 9.20pm and not only that, there would also be  a lunar eclipse - lasting some forty five minutes.

Shirley and I drove out of the city up onto the moors from where we hoped we might get a good view of the heavenly event. We were not alone. There were dozens of other motor vehicles out on the moorland roads - people parked up also hoping to see the magic in the sky.

But as on August 11th 1999, clouds got in the way. We saw nothing, nada, zilch but at least we were not seven hours away - down in Cornwall. We stopped off at "The Norfolk Arms" for a couple of beers before heading home.

I guess life itself can sometimes mirror these astronomical disappointments. You look forward to something with eager anticipation and then clouds appear. As Joni Mitchell sang:-
So many things I would have done
But clouds got in my way.
- July 28, 2018