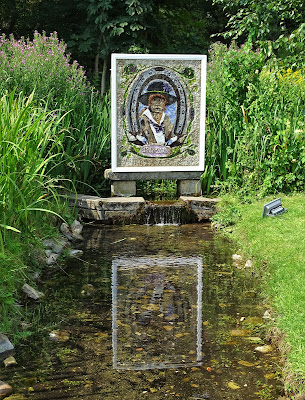 Over the border in north Derbyshire, several villages still practise the ancient tradition of "well dressing". This tends to be a summertime activity.

Please don't think of a well as being a hole in the ground down which buckets are lowered on ropes. In Derbyshire a "well" is simply a water source like a spring and of course going way back in time it was very common for our ancestors to treat such sites with reverence and gratitude. Wells were holy locations. They are places where water magically "wells" up from the ground.

To dress a well you need clay, a large frame and an idea. The pictures are made up using natural ingredients such as petals, nutshells, grasses, pine cones and so forth. They are pressed into the damp clay - creating a kind of natural but temporary mosaic.

Yesterday, Shirley and I dropped into The Peak District village of Stoney Middleton where we visited two well dressings. The main one was in The Nook near to the village church and the second one was close to the Roman Bath House.

The first one depicted a local industrial strike that lasted for two years (1918-1920). It concerned boot and shoe makers from both Stoney Middleton and the neighbouring village of Eyam. Their brave battle against obstinate and scornful employers was a milestone in  trade union history.

The second well dressing marked a hundred years of women's suffrage. The central image is of the Irish suffragette Lillian Margaret Metge (1871-1954). 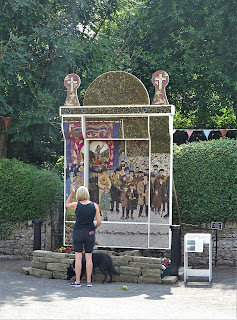 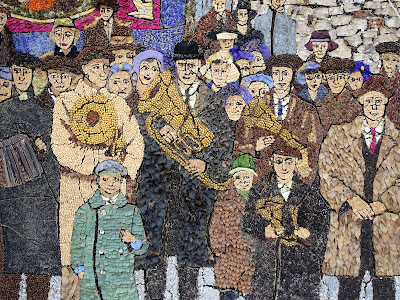