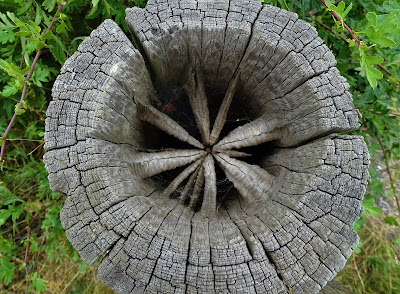 Yesterday, I drove out to the village of Marsh Lane for another constitutional walk. Please do not be alarmed - for this time I am not going to explain my plodding itinerary. Instead, I just want to share with you a little detail - something I spotted along the way - and something I had never encountered before.


Not far from Shady Hall Farm, I arrived at a wooden stile. Next to it there was an old post. Perhaps it had once been part of a telegraph pole. As I clambered over the stile, something about that post caught my eye. The interior of it was hollow apart from a strange star shape within.

I thought it might be some sort of fungus but when I inspected the post further I deduced that this radiating structure was in fact the legacy left behind in the heartwood  by old offshoots and branches. For every one of those little arms there was a corresponding knot on the outside of the wooden post. The softer heartwood had rotted away over the years, leaving these more resilient structures behind.

They say that we learn something new every day and that detail was yesterday's big learning moment for me. Magic. 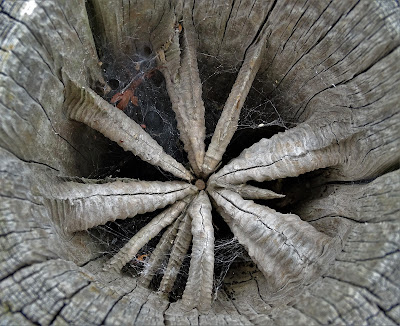 And here's a Nature note from last week - just in case I forget. As I was walking down to the Oxfam shop, I spotted something moving along the pavement near the Chinese fish and chip shop. Initially I thought it was a baby rat but when it scaled the little brick wall - just two yards from me - it stopped to take a look at the passing giant. It was a weasel! A weasel in a busy suburb. In spite of all my countryside rambles and country childhood, that was the closest I have ever been to a wild weasel in my life! Magic. 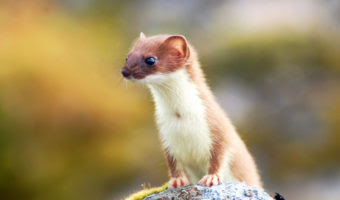