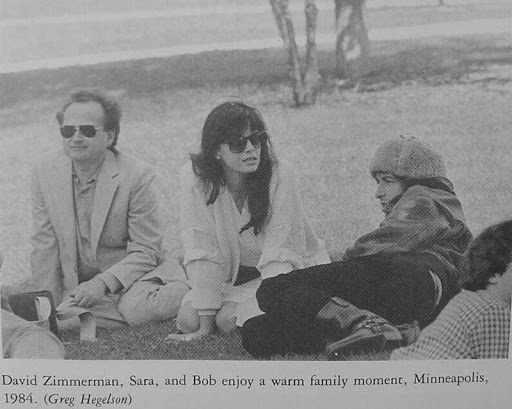 The internet will lead you down so many rabbit holes. Listening to Bob Dylan last week got me thinking about his younger brother David Benjamin Zimmerman. As far as I know, Dylan has never spoken about his brother in public and has never written about him either.

He's five years younger than his famous sibling and at 74 years old I believe that he currently lives in Hanover, Minnesota - a small city to the northwest of Minneapolis. Once he was a high school teacher but later he worked in the music industry - in production and management. It is widely acknowledged that David was responsible for breathing fresh life into Dylan's brilliant 1975  album - "Blood on the Tracks". He persuaded Bob to use Minneapolis-based musicians and fresh recordings happened in that city ahead of the album's release.

Having a very famous sibling cannot be easy for anyone. There may be feelings of jealousy, self-doubt or plain annoyance. It's probably best that for the past sixty years David Zimmerman has remained in the shadows - able to live an ordinary life in relative obscurity. If you google his name, you will find very few pictures of him and hardly any biographical information.

Some say that Dylan is occasionally seen in Hanover but there's so much mythology about the guy and parts of his life are shrouded in mystery. Even before he dies, it is as if his life has entered a world of half-truth, rumour and make-believe. This is somewhat ironic as it seems to me that the purpose of his songs has been to seek truth, to bare the human soul, to shine light in the shadows.

Close to The Crow River in Hanover lives a man called David B.Zimmerman and his wife Gayle J. Zimmerman. They are both 74 years old. I could tell you their address, even show you a picture of their house and name their now grown-up sons but that would be like breaking a confidence. They have guarded their relative anonymity all these years, shunning the limelight cast by David's brother and no doubt seeking to forge a wholesome "normal" life of their own. I will leave them be. Time to cease my rabbit hunt.