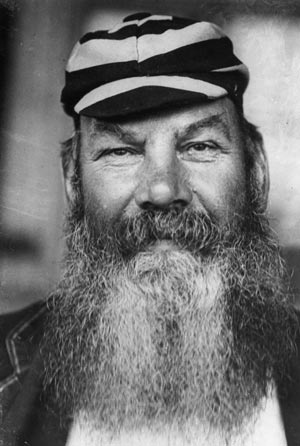 Cricket is just one of several sports that were effectively invented here in England. What could be more English than a game of cricket played upon a village green? The players all dressed in white as bats made of willow strike red leather balls. And then at four thirty the teams break for afternoon tea before the game reaches its conclusion in evening sunlight.

I love the picture displayed above. It is a photograph of one of England's most famous cricketers - the inimitable W.G.Grace. William Gilbert Grace lived between 1848 and 1915 and by all accounts was an outstanding cricketer - a legend in his own time. He was a free scoring batsman who loved the game with all his heart and played for both the England national team and his home county - Gloucestershire. In fact, he played the game for forty four seasons in a row - only pulling down the shutters on his career when he finally admitted to himself that as a fielder he had become a hefty passenger - hardly able to run for a ball any more.

He played 22 test matches - mostly against Australia and scored over 55,000 first class runs. In his younger days, he was also an effective bowler but it was with the bat that he excelled - putting the fear of God into many of the bowlers he faced.