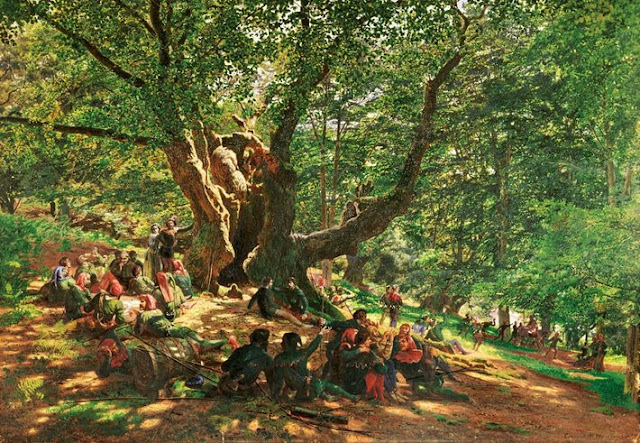 They bullied me along various tracks until we arrived at the merry men's encampment in the heart of Sherwood Forest. A fire was burning in the hearth and above it, the sizzling carcass of a plump wild boar roasted on a stout stick. There was an apple in his mouth.

Several rustic hammocks had been strung between the trees and bows and arrows were propped up against a big rock - most likely an erratic deposited here during the last Ice Age. Two black dogs were sleeping in the shade of a holly bush but they began to growl when I was pushed into the clearing.

Someone stirred in one of the hammocks and a man in Lincoln green clambered out. He was clearly their leader - Robin Hood. The legendary outlaw who famously stole from the rich to help the poor. A true man of the people. One of his front teeth - an incisor - was golden. It flashed momentarily in a beam of sunlight that had pierced the canopy above.

"Now my merry lads, what be this thou hast brought me?"

"It be Ye Olde Puddinge of Yorkshire!" said the fat monk."Allan-a-Dale found him by Hanger Hill."

"Unbind him Little John!" commanded Robin. "I shall parley with Ye Olde Puddinge. See what he knoweth.  I also hail from Yorkshire - from Loxley near Sheafeld and I trust Yorkshire folk more than ye Nottinghamshire louts!"

The merrie men and Marian guffawed in unison.

Robin led me to a shady bower and gave me water from a wooden bowl. We sat on logs watched by the two curs under the holly bush. The merry men busied themselves with camp duties or sat about in idle conversation.

Robin was an easy fellow to get along with. Though almost half my age he was sharp-witted and wise beyond his years. I explained to him that in modern times he had become a sort of mythical hero who featured in book and film and song. He was gratified to hear this but could not grasp the concept of film.

He asked many questions about future times and was saddened to learn that as centuries had passed by the rich had only got richer and the poor had become poorer. I told him about childhood mortality, malaria, access to clean water and hunger. We also got round to talking about Trump and the coronavirus pandemic which Robin likened to plagues of the medieval period. In return he told me about some of the robberies he had planned and successfully executed. He equated Trump with his nemesis - the wicked Sheriff of Nottingham.

"It were all for the ordinary folk!" smiled Robin. "My people!"

Maid Marian came into the bower carrying a flagon of wine and for a while she sat at Robin's feet looking dreamily into his eyes as her chest heaved beneath a laced bodice. It was impossible to avert my eyes.

We spoke so long that evening had begun to fall. A warm August night lay ahead.

It was time to feast. Roasted wild boar, hunks of bread, sweet apples  and goblets of red wine. Allan-a-Dale played merry songs of yore as the tongues of flame in the fireplace shrank into embers. Robin led Maid Marian back to the bower as I fell into a slumber on the forest floor close by the dying fire, surrounded by other members of the band of merry men - including Will Scarlet, David of Doncaster, Robert de Brague and Much the Miller's Son.

I slept soundly - like one of the logs by the fire. With daylight, I was woken by doves in the treetops and as is often the case when we wake up, I had completely forgotten where I was. I opened my eyes to find myself in a forest clearing by the ashes of a woodland fire.

But the thing was - nobody else was there. No Merrie Men. No Robin Hood. Not even any bows and arrows. Just the bones of the roasted pig and some apple cores.

I urinated close by the holly bush where the dogs had been and then stumbled around, trying to find my way out of the dense forest. Before long I discerned a narrow path that eventually led to a wider track that took me to Meden Vale. I still had my A4 map in my rucksack and after half an hour I was back on Cherry Grove in Market Warsop. It was where I had parked Clint the previous day.

"You dirty stop out!" he exclaimed as I approached. "Where the hell have you been?"

We drove back to Sheffield in silence as jumbled images from the night before mingled together upon my mind's screen.