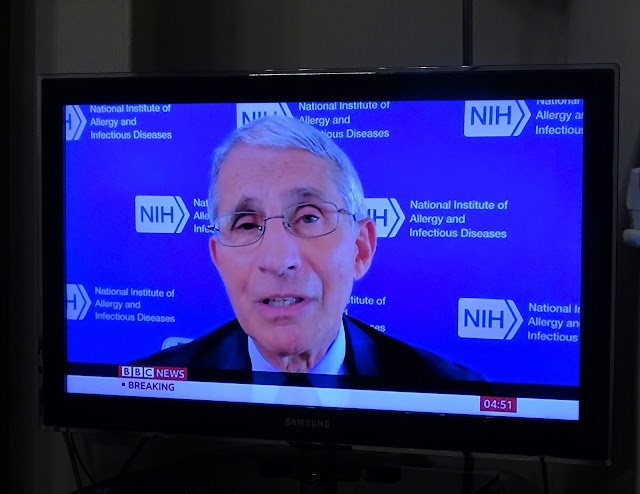 There's Dr Anthony Fauci on our television screen. It's just before five in the morning and he's talking to the BBC about the wisdom of wearing masks. He is one of the good guys, caught between a rock and a hard place . He declares in no uncertain terms that there is no evidence whatsoever that hydroxychloroquine has any impact at all on COVID19.

Last night I moseyed on down to the local pub - expecting to spend a safe ninety minutes supping ale and chewing the cud with my old mates Steve and Bert - keeping six feet away from each other. To my dismay I noticed that they were sitting with two other regulars - a middle aged married couple who had been in the establishment for hours and were filled to the brim with bonhomie.

Anyway, one thing leads to another, The couple call a black dog over from the front lobby. He's a happy Staffordshire crossbreed with a calm temperament and a tail that wags like a crazed pendulum. Then the dog's owner comes into the tap room. He had been on the doorstep smoking a cigarette.

He's a big, red-haired guy with a belly like a pillow. He's standing too close to me talking to the married couple about his dog. All very friendly. But he's too close to me. He is in my space. I move my chair away from him - a foot or so. The friendly banter continues. My radar continues to bleep - "Get out of my space!"

Then damn me, though I have not engaged with the dog owner, he bends down, puts his arm on my shoulder and shares a light-hearted confidence right in my face. I  want to scream, "Keep your distance!" but it's too late, the deed is done - albeit it unconsciously, innocently with no ill intent.

But it could have been in that moment that the virus was passed to me. It could have been the initial signal of my eventual demise. I didn't even know the guy's name. To me he was a complete stranger.

What is it with other people? There are so many out there who still don't seem to grasp the importance of social distancing. Many times during this pandemic  my invisible bubble has been invaded - in supermarkets etcetera - but never as blatantly as last night. All I can do is hope that that fellow is "clean".

Dr Anthony Fauci has gone now but his messages remain clear and consistent - including, keep your distance and wear masks.  This health crisis isn't over by a long way. We need to remain on guard at all times and keep our fingers crossed that our fellow citizens have the same understanding.
- August 03, 2020