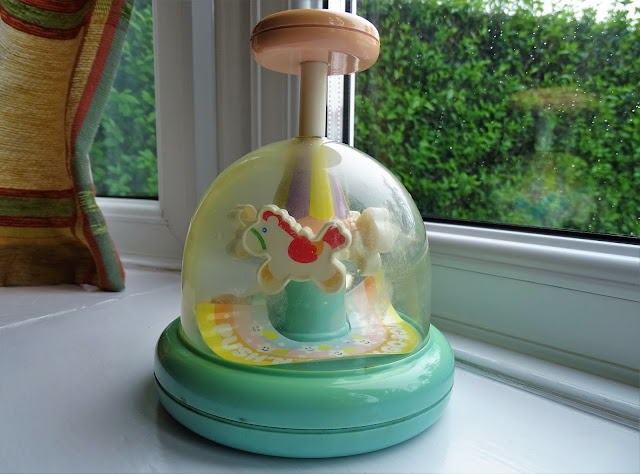 Shirley and I are not really certifiable  hoarders but in our house there's a lot of stuff that we have struggled to cast out. It's up in our attic. It's in the underhouse room. It's in our drawers and cupboards. Lots of stuff.

At the weekend Shirley mustered the energy to venture up into our attic to do some clearing out. We managed to rid ourselves of three old suitcases and filled them with various half-forgotten items that have lain up in the attic for years.

She brought down some baby things. The picture at the top of this blogpost is all that remains of an old push toy made by "Tomy". You pressed the plunger on the top and the carousel inside the transparent  plastic chamber went round with tinkly music. Our son, Ian, played with it when he was a baby thirty five years ago. But now it has gone.

Shirley also found two plastic pull toys. One is an orange duck and the other is a bee. The orange duck belonged to Ian, the bee to Frances. You pulled the cord and the duck slowly flapped its wings as the tune of "Frère Jacques" played in music-box style.

We simply could not bring ourselves to throw those toys out. They still work. The orange duck is special in our memory because of something that happened when Ian was around ten months old. We were riding home from Shirley's parents' farm in Lincolnshire when a little voice piped up from the baby seat in the back of our red Ford Fiesta. He was effectively voicing the frequently heard tune of "Frère Jacques". We were both gobsmacked. This happened before he had yet said an intelligible word. How could we throw that toy away?

I might have asked about your relationship with "stuff" and your attitude to discarding it but some visitors might have imagined it was another tricky philosophical question like the one I innocently asked in my last blogpost. How could I have been so stupid? 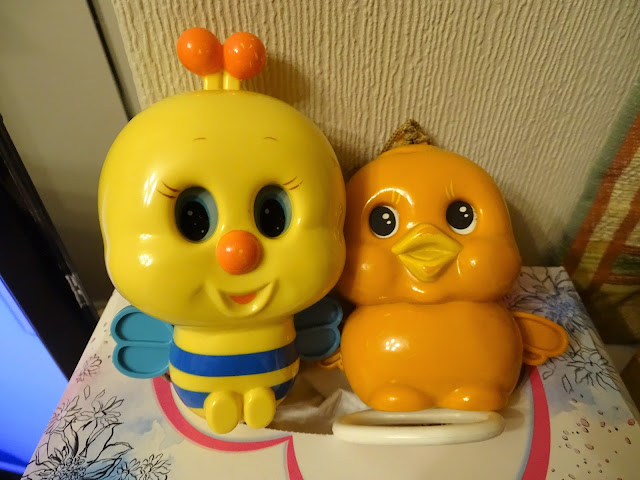