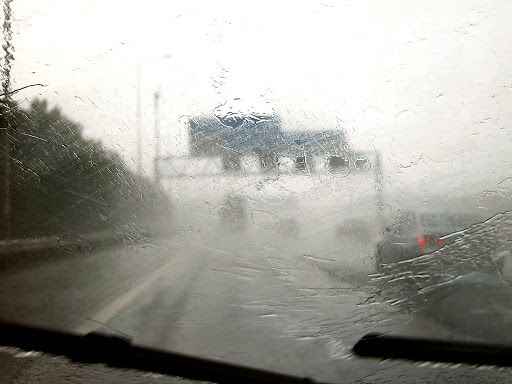 Late Thursday afternoon driving down to London in a Vauxhall Vivaro van courtesy of Enterprise Van Hire. One's concentration had to be turned on to full intensity because of the inclement weather.

Rain fell heavily all the way and reduced speed limits were in force for each one of the hundred and seventy miles. The surface water was sprayed up like a fog and getting past slow moving heavy goods vehicles was rather nightmarish. I gripped the steering wheel, listened to Radio 4 and hoped for the best, arriving in Wood Green, London four hours after setting off.

We went straight out to "Capital" - one of the big Turkish restaurants on the high street. As usual, the food was delightful. Frances's belly is now bulging for she is half way through her pregnancy. It was bulging a little more when we left "Capital".

Friday morning was sunny and dry. I stirred later than I had intended. Stewart was already loading the van but I was soon out there carrying boxes and bags. He did a good job of squeezing it all in - making maximum use of the space available.

At half past ten they locked their London flat and with three of us in the front of the Vivaro we set off back to the land of Up North. There were a few mysterious hold ups on the M1 and at a couple of points we ended up stationary but we were back in Sheffield by two thirty.

They are renting a house in the suburbs - about a mile from where we live while their London flat is rented out to two friends. I think it was COVID19 that drew Frances and Stew back from London. For months they were trapped in their flat. It became a place not just to live but to work too. Frances found that working from home could be just as effective as working in her office with colleagues around.

London's transport system became a no-go area and they were cut off from friends. In this climate and with a baby on the way, the idea was hatched to get back to their home city. It seems that they have no intention of returning to London even though it was the availability of decent paying jobs that pulled them there in the first place. It's a huge decision inspired by their COVID experience.

Sheffield will be a better place for our first grandchild to be born and raised and I keep my fingers crossed that in the post-Brexit, ongoing COVID world their work situation will be buoyant. Sometimes you just have to be brave and dive or you'll remain shivering on the diving board forever.