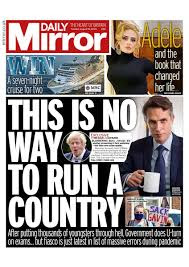 One of the terrible things that this damned pandemic has done is to disrupt children's formal education. Essentially, British schoolchildren have not attended their schools since the middle of March. This means that kids in their mid-teens have not sat public examinations (GCSE) and those aged eighteen have not sat their A level and BTEC exams.
In normal years, the results of those exams come out in mid-August but this year's process has ended in pure chaos or what most newspapers have called a "fiasco".
You would have thought that Johnson's government working with examination boards would have determined an acceptable solution to this difficult situation. After all, they have had plenty of time in which to do that - some five months.
Faulty computer algorithms have been applied to known data and the flawed results that have been issued have caused a furore amongst parents, pupils, schools and universities. It was always going to be tricky but if the issues had been properly thought through  with clear communication then we would not be in the mess that has resulted.
At the heart of it all is a floundering, hapless Minister of Education who I am ashamed to say is a Yorkshireman. He is called Gavin Williamson and if he were a football referee, the crowd would be singing, "You don't know what you're doing!" His arrogance has been breathtaking.
There have been many tears with heartbroken teenagers denied the academic futures they had been anticipating.  University admission teams have had their careful procedures upended. As I say, it's utter chaos.
I was a GCSE  examiner for twelve years and as the Head of English in a challenging secondary school, I was very familiar with the system and how exam results impacted on children and the schools they attended. Now, by being forced into utilising classroom teachers' grade predictions to determine final results there is a likelihood that awarded grades will be heavily inflated. The results for 2020 will be out of synch with previous years and years to come. This could have all been avoided with practical foresight, planning and healthy two-way communication with schools.
Williamson, Johnson and the exam boards owed it to young people - not to let them down in this terribly disrupted COVID year but that is precisely what they have done. And one of the main casualties is trust. 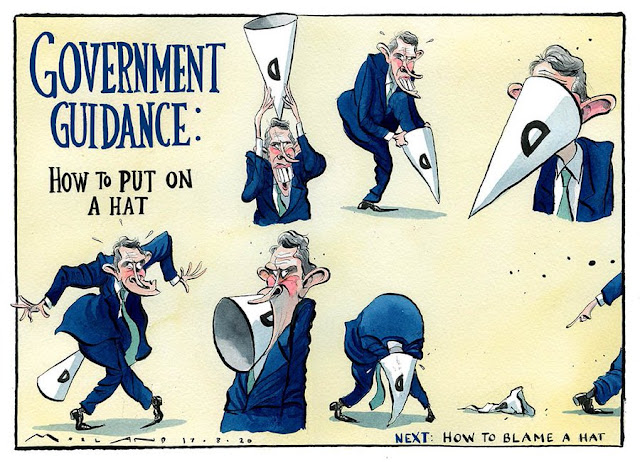 Gavin Williamson caricatured in "The Times" this morning
- August 18, 2020